Final Fantasy Wiki
Register
Don't have an account?
Sign In
Advertisement
in: Characters in World of Final Fantasy, Antagonists

Edit
watch 18:06
World of Final Fantasy Plumed Knight and Knight in the Golden Mask Boss Fight
Do you like this video?
Play Sound

Cid Pollendina: Oh, shut up and help me remodel the Pellinore page!
Please expand this article into a full one. The following tasks need to be completed:This request can be discussed on the associated discussion page. Remove this notice upon completion.

A knight in plumed armor who fights adeptly on land and in the sky. She intends to see the prophecy fulfilled, and begins by seeking out Grymoirians with a very specific gift...

Pellinore, known to the party as the Plumed Knight (羽付の騎士, Hanetsuki no Kishi?), is a major antagonist in World of Final Fantasy. She is a core member of the Bahamutian Federation, working alongside Brandelis and the Segwarides in conquering Grymoire.

Similar to Segwarides, Pellinore is based on Valigarmanda, an esper from Final Fantasy VI. It's confirmed in-game that she was a Valigarmanda class esper before becoming an Exnine Knight. Her Freezing Dust attack in her first few boss fights references an attack of the same name used by Valigarmanda in Final Fantasy VI, during the battle against the enchanted ice imprisoning the esper. Pellinore's Tri Disaster attack, used in the final fight with her, references the attack Valigarmanda used when the party freed it from the ice.

Soul Beneath the Armor
Valigarmanda Pellinore

An Unstable Copy
At Brandelis's behest, Pellinore copied herself into the body of a human in order to enter Grymoire. However, this method of entry allowed her to reproduce only a mere fraction of her powers. What's more, Lusse's tremendously strong will continues to vie for control of her body; for a hundred years now, Pellinore's stay in Grymoire has been a tenuous proposition.

Ultimate Forms
Pellinore and Segwarides have ultimate forms, similar to the final form that Brandelis assumed. However, because of their nebulous existence in Grymoire, they cannot perform these sorts of transformations. Still, their originals remain unscathed and unaffected by the outcome of this story, so perhaps there are more of Pellinore and Segwarides out there, terrorizing other worlds in their true forms.

Pecking Order
Pellinore's numeric designation in the Exnine Knights is Ex9-III-4. While the knights have no defined hierarchy, and no single one of them can technically lord over another, Brandelis rose to a natural position of leadership in Grymoire because he was able to wield the greatest amount of power therein.

Pellinore is an Exnine Knight and a member of the Order of the Circle. She was created from the merging of a Valigarmanda class esper, a human woman named Epona and an entity from the Extraverse.

After the twins leave Yuna at the Pyreglow Forest, Pellinore appears and attempts to kidnap her but fails due to Yuna being an illusion. She mentions how tired she is of waiting and flies away, hoping to enjoy a good chase.

After being defeated at Exnine Castle, Pellinore reverts back into a dying Lusse.

Pellinore is fought two times throughout the game's story, once during the events of Chapter 21 at Castle Exnine, and another during Postscript serving as one of the penultimate fights to the final boss.

Introduction as the "Plumed Knight". 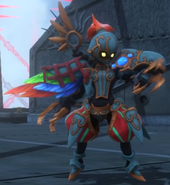 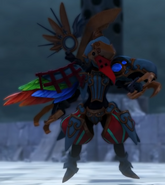