Detects by Sight
List of Peiste Enemies
Peiste is a genus of enemies in Final Fantasy XI.

In the days before the Great War, this species of lizard could be found inhabiting wetlands across the continent of Quon, subsisting primarily on insects and other small animals. The Peiste's deadly arsenal of eight auburn-toned spikes, used for both intimidation displays as well as to dispatch their prey, were known to contain a potent and lethal poison. They met their demise at the hands of the beastmen hordes, whose careless overhunting led to the eventual extinction of the species.

That is the case in Vana'diel, at least. In Abyssea, Peistes like Kukulkan and Gukumatz terrorize, ravage, and slaughter anyone unfortunate enough to encounter them. 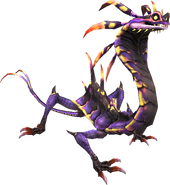