Pazuzu is a monster from Final Fantasy Mystic Quest, the Fiend of Wind and one of the Vile Four. Benjamin finds it in Pazuzu's Tower, but Pazuzu uses an elevator to avoid battle several times. Benjamin throws a number of switches to stop the elevator so he can force Pazuzu to fight.

Pazuzu is later reincarnated as the Zuh in Doom Castle.

Pazuzu wields a move called PsychShield, which reflects magic attacks back at their caster, with the somewhat unique gimmick that, should a spell that is effective against him be used on him during PsychShield, the reflected spell will still have its bonus damage added to the attack the caster receives. He also wields several other air-elemental attacks.

After he is defeated, the Crystal of Wind reverts to normal.

Unlike the rest of the Vile Four, their reincarnations, or the Dark King, Pazuzu has only three phases to the battle, depending on how much HP it has left. The first phase has Pazuzu in a battle-ready pose, his beak open. After losing a third of its health, Pazuzu looks fatigued. After losing two thirds of his health, Pazuzu lies on the ground, using his left elbow to prop himself up, and his eyes glow red.

It is best to start the battle with the best attacks or spells; Aero and Flare are good. On the 5th turn Pazuzu's speed drops to 0 to use PsychShield, and he will use an attack of his choosing. While PsychShield is up the player should use either physical attacks or replenish magic with Seeds. PsychShield will come off on Pazuzu's third attack, and he will switch PsychShield on and off every three attacks. 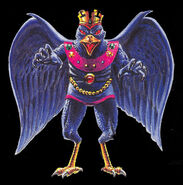 Retrieved from "https://finalfantasy.fandom.com/wiki/Pazuzu?oldid=3020608"
Community content is available under CC-BY-SA unless otherwise noted.