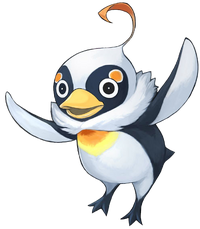 Pavlov (パブロフ, Paburofu?) is a penguin from Final Fantasy Crystal Chronicles: My Life as a King. He follows King Leo around and assists him by providing information.

Pavlov first appears in Padarak one night, knocking over King Leo as he bursts out of the Castle. He begins to claim the land belongs to him and demands King Leo leave. King Leo then chases Pavlov through the Kingdom until he is eventually caught. When Chime and Hugh Yurg try to introduce themselves to Pavlov, he reveals that he already knows their names and refuses to answer any of their questions.

The next morning, he decides to help King Leo, but when asked why he states only that he is keeping a promise he made. He then follows King Leo around, offering him advice or the occasional friendly jab while keeping records about the kingdom and its adventurers.

According to the townspeople of Padarak, Pavlov was rescued from drowning in a lake by King Epitav, Leo's father. It was Epitav who taught Pavlov how to speak, and that is why he shares many of Epitav's personality traits.

There is an armor and head gear that makes Lilties appear as Pavlov. The mercenary Elen Dok, who can be recruited in Very Hard mode, starts off with a full set of Pavlov armor.

Final Fantasy Crystal Chronicles: My Life as a King
Retrieved from "https://finalfantasy.fandom.com/wiki/Pavlov?oldid=3232055"
Community content is available under CC-BY-SA unless otherwise noted.