Patron's Palace is a location in Lightning Returns: Final Fantasy XIII. While it is called "palace" the interior suggests that it is mainly a warehouse. Patron's Palace is the tutorial/prologue area, but after the prologue is over, the player can return to Yusnaan to make their way back to the palace to confront Snow Villiers. Snow is the leader of Yusnaan and makes his abode in the heart of the palace.

The glittering city of Yusnaan is the one and only hub of production left in the world. Most industries fell to the encroaching Chaos and materials have become scarce and even impossible to attain. In this world, most of the food and goods needed for daily living are made of Pandaemonium, the last of the fal'Cie.

The goods made by the fal'Cie are shipped to the palace and then redistributed throughout Nova Chrysalia. The palace that plays host to the nightly banquets is also a vital link in humanity's last lifeline, and as the Patron, Snow bears the heavy responsibility of protecting it.

Lightning crashes the end of the world celebrations at the palace to apprehend Snow, the patron of Yusnaan who resides in the palace. The crowd scatters and Chaos bursts inside the palace with Anubyses emerging from it. Snow and Lightning dispatch them together before turning their weapons against one another. Snow asks if she is going to save his soul and Lightning appears willing to fight for it. Lumina appears and breaks Lightning's weapon, then drops the ballroom chandelier. Snow halts its descend by summoning a crystal structure from the ground.

Lightning follows Snow deeper into the palace, but her path is blocked by a Zaltys Lumina summons from the Chaos. She taunts Lightning before disappearing, leaving Lightning to fight the beast alone. Snow locks himself in a room with a Chaos infusion and Lightning worries for his sanity. Hope urges her via a communicator to escape the palace as the guards are approaching, and Lightning teleports to the Ark determined to return later.

Despite having witnessed Snow's changed personality, Lightning hasn't given up on him and returns to Yusnaan. She hitches a role in The Song of the Savior and during her performance topples the statue of Bhunivelze to cross the palace walls. Lightning infiltrates the palace and finds numerous Chaos infusions running rampant inside. She finds Serah's engagement pendant from Snow's room and uses it to dispel the spell that bounds the door Snow had locked. She finds Snow and a massive Chaos infusion he had concealed to stop it from spreading. Snow is overcome with grief and regret and longs to die to reunite with Serah in death. He doesn't think he deserves being with her again even if Lightning's claims of Serah being resurrected in the new world were true. He explains his earlier behavior was a ruse to confirm Lightning was not an imposter, but now knows Lightning is who she claims to be as she knew to use the pendant to open the door.

Snow intends to absorb the Chaos infusion and have Lightning kill him to save Yusnaan. Lightning shouts at him to stop, but Snow walks into the Chaos and transforms into a Cie'th and attacks Lightning. Lightning subdues him in battle and the Chaos disappears and Snow is left lying on the floor, unresponsive. Lumina appears and tells Lightning she should kill Snow as that's what he wants. However, Lightning promises Snow he will see Serah again and saves his soul, reverting his transformation. Yusnaan is saved from the Chaos at least for the time being, and Snow dedicates his time to overseeing the repairing of the damage on Augur's Quarter Lightning had caused when she infiltrated the palace. The palace itself remains monster-infested and abandoned. 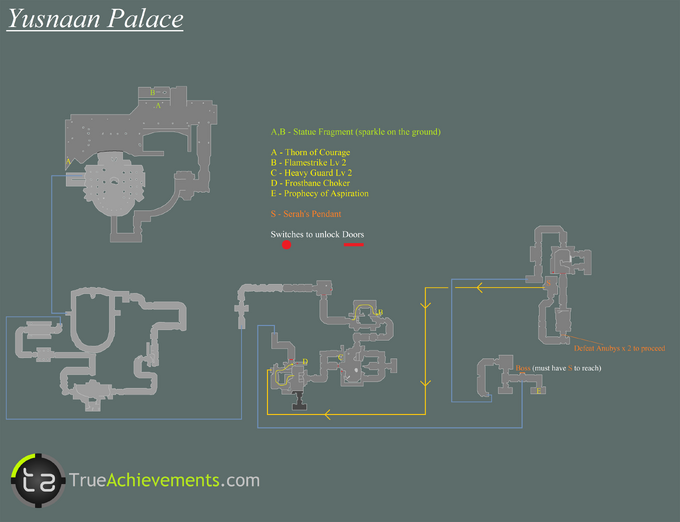 Entry 1
Lightning steps into the grand ballroom that lies at the heart of Yusnaan and confronts Snow, ruler of the city. He makes it clear that the reunion is not welcome, and the pair cross swords. But before their conflict can escalate, they must deal with monsters that have emerged from the Chaos.

Entry 2
Eventually, Snow slips away through the Chaos, and Lightning is left trapped in the ballroom. If she is to catch Snow, she must first kill the monsters and get the doors open again.

Entry 3
Lightning manages to slay all the monsters in the ballroom and the automated defenses unseal the doors. Lightning hurries toward the upper floors of the palace in pursuit of Snow. Snow is not the man he used to be. He has changed—but then, so has Lightning. She is the savior now, and she wants Snow's soul.

Entry 4
As Lightning desperately chases Snow, a mysterious young woman appears in front of her. Lightning defeats the monster that the girl summons, but when Lightning tries to continue the pursuit, she finds her way blocked. With palace guards right on her heels, she has no choice but to give up the chase and return to the Ark.

This scenario works as a tutorial and a prologue. It is also the playable scenario in the Lightning Returns: Final Fantasy XIII demo.

During the battle against Anubys the tutorial on Schemata and the battle interface plays. Once the battle ends Lightning learns about the camera settings, and more enemies spawn. The goal is to clear the room by defeating all enemies. There will be a tutorial teaching how to guard against incoming attacks.

After defeating all enemies a door opens. The path leads to a black market dealer and there is a tutorial on how to buy items. The player should stock up on Potions (they are free), then head upstairs and go left.

There are more enemies in the next corridor and a tutorial on how to switch targets on the battlefield. Continuing down the corridor and jumping on the crates there is another corridor, and a large hall with Snow going left. Lightning must climb the ladder on the left side and push forward. At the end of the next corridor there is a gate. Lightning must push the button on the pillar nearby (right side while facing the gate), and eventually she will enter a hall where Lumina appears.

Lumina summons a Zaltys for Lightning to battle, part of the next tutorial that teaches how to stagger enemies. Defeating it earns a Firewyrm Scale.

Approaching the door at the end of the path ends the quest. Completing the quest earns the The Savior's Descent achievement.

Entry 1
It was an elaborate plan, but Lightning has finally reached the grounds of Snow's palace, which are infested with thick clouds of Chaos. It could be just a natural outbreak–or something much more sinister. Snow is the last remaining l'Cie, cursed with tremendous powers and an evil destiny. When a l'Cie reaches the end of his strength and falls into despair, he is transformed into a grim creature known as a Cie'th.

Entry 2
Beyond the sealed door, Lightning senses the dim presence of Snow. But the door is encased in ice, created with the otherworldly powers of the l'Cie. The ice is the very manifestation of Snow's torment, and Lightning cannot break it with brute strength. Elsewhere in the palace will be a key. Something important to Snow. Something that will resonate with his heart.

Entry 2
The private room of the man who rules Yusnaan looks more like a torture chamber than a place of repose.

Entry 3
On the table in the middle of the room, Lightning finds the pendant that Snow gave to Serah as a token of their love. Did he leave it here because he has abandoned his love—or because he wanted to keep it safe? Everything depends on the answer. If this does not melt the ice, then nothing ever will.

Entry 4
Snow has been using his l'Cie powers to absorb the Chaos, fighting a solitary battle against the rising tide. In a last desperate act, Snow allows himself to be transformed into a Cie'th and attacks Lightning. But she cries out one last appeal: Don't let your love for Serah disappear into the Chaos! Somehow, Snow hears her—and returns to human form.

Following the same path as in the prologue, Lightning will reach a locked door but it can be opened using the ID Card obtained earlier. Lightning can follow the corridor to reach a closed gate, but tapping the red button near the crates opens it. Lightning should follow the main corridor until she will end up in a larger area. Moving east, then south, then west, around the area gets her to the top floor. Jumping over a small pile of crates, Lightning will eventually reach another large chamber with a closed gate where the switch is above her position. Jumping over more crates Lightning should head east through a new tunnel, then move south and then west following the upper corridor to reach the area above the gate. Going around the chamber where the gate is (now below Lightning), she will reach the red switch and head through it.

Moving east, then south, and then east again, Lightning enters another larger area with multiple crates and vertical structures. Jumping down, hopping over the crates and following the tunnel to some smashable boxes on the left side finds a ladder behind them to get to the switch and a treasure sphere containing Frostbane Choker.

Lightning should activate the switch, follow the tunnel behind the gate, jump over more crates and find a soldier who will sell her Potions and Phoenix Downs. Following the main corridor finds a frozen door that cannot be opened yet. Lightning must head west and continue along the main passage that leads to a ladder. Climbing it, Lightning can see into Snow's Room, but it cannot be entered from this side. Following the corridor north, then east, finds another chamber. The switch needed to activate is on the right side, while in the middle of the chamber is a ladder. Lightning should climb it, head left and kill the Anubys guards.

Lightning can now get into Snow's Room and get Serah's pendant. Lightning should jump through the hole to get on the lower level and move south, east and north over the crates to get to the frozen door that now opens leading Lightning to Patron's Chamber where Snow awaits.

Defeating Snow Villiers (see boss article for strategies) completes the quest and earns Maximum EP +1, Maximum HP +300, Maximum ATB +10, Strength +112, and Magic +28. After the battle Lightning can pick-up the Ghostly Hood from the sparkling red area on the ground.

Completing the quest earns the Hope at the Edge of Despair achievement.