Passage of the Eidolons

Passage of the Eidolons

The entrance to the Feymarch, hidden on an island within the earth!

Its caverns link the Underworld to the Feymarch, land of Eidolons. The cave is littered with many lava-filled pits and, in Final Fantasy IV, the lava pits will damage the party if stepped on. Rosa can prevent this damage by casting Float on the party. The spell will need to be recast whenever a new floor is reached. On the third basement level of the passage, a blue prism awaits that will teleport the party to the Feymarch.

In The After Years, the party will not be hurt by stepping on the lava-filled pits. This is due to the lack of a usable White Mage character that can use Float during Rydia's Tale. The 3D version lacks lava.

In Final Fantasy IV, the Passage of the Eidolons is an optional dungeon accessible after the airship Falcon is obtained, though the player may wish to level up their party first to prepare for the tough monsters that nest in the cave. The cave is part of the story in The After Years.

After Leviathan teleports Rydia away, she sees that the citizens, including the King and Queen, have turned to stone. As she exits to the cave, she says that she needs to tell everyone about what happened at the Feymarch. Outside the cave, she notices that Luca and the Falcon are gone. A Zu ambushes Rydia, but the Falcon arrives in time and slays the beast with its cannon. 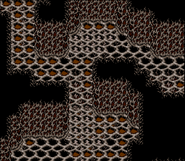 The island on the world map (DS/iOS).

The island on the world map (PSP). 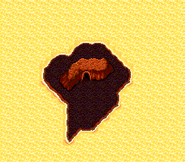 The island on the world map (SNES).

The passage in The After Years (PSP).