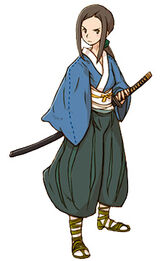 Parivir (用心棒, Yōjinbō?, lit. Bodyguard) is a job class in the Final Fantasy series. Their skillsets, known as Flair, allows them to use numerous elemental and status effect inflicting sword techniques.

During the Rank I mark "Marauder in the Mines" (Nidhogg) the non-player character named Aekom mentions that the beast is too strong for Bhujerba's Parivir. The word is italicized, implying that it is a Bhujerban word within the context of the game. The Parivir job is otherwise not shown.

Parivir is a job available to humes. Parivirs wield katanas and can inflict elemental damage and/or status effects with their sword techniques, at virtually no MP cost. Their defenses leave much to be desired, but they are considered top-notch front-line fighters.

Parivirs appeared as hume SR units available for players to recruit. The Parivirs were frontline units that functioned as strong physical attackers and had access to the Rear Attack ability, which dealt three sword slashes to enemy units.

The original in-game lore described them as former ink painters that took up the life of a wandering swordsman.

The Parivir is a job for players to become after they have a level 10 Fighter and a level 15 Samurai. The specialize in using swords and katanas, and deal extra damage with physical attack abilities.

Parivir appears with a Fire-elemental card.

The Parivir appeared on a gold card.