Cid Pollendina: Oh, shut up and help me remodel the Paramina Rift page!
Please expand this article into a full one. The following tasks need to be completed:

The Paramina Rift is a location in the land of Ivalice in Final Fantasy XII. It is a mountain pass that must be crossed to get to Mt Bur-Omisace.

The Paramina Rift is located on Jagd Ramooda, to the northeast of the Ozmone Plain, and is only accessible via the Golmore Jungle. Mt Bur-Omisace lies to the north of the mountain range. To the west, the Rift connects with the Feywood, and the Stilshrine of Miriam is accessible to the south.

Paramina Rift is of snow terrain and therefore all Ice damage is boosted. During a blizzard Fire, Ice and Wind attacks are all boosted, and Water damage is halved. 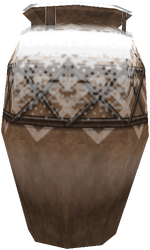 In Icebound Flow, the treasure that spawns between the two northern exits may have the Glacial Staff. The treasure right before exit to Feywood can have the Ice Shield. In Karydine Glacier, the player may find another Glacial Staff in the northeast dead-end above the frozen river. The treasures in the southeast and southwest may have gambits for attacking foes that are weak or vulnerable to Ice. In the western cutoff area of the Silverflow's End many treasures can spawn at the southern end. The player may find Thief's Cuffs, Burgonet and Shielded Armor in there.

The Zodiac versions have all new treasures. The Silverflow's End, Karydine Glacier and Icebound Flow now hold various equipment pieces, making it worthwhile to scour these spots when going through the rift. The Glacial Staff is a great weapon for a Black Mage until endgame for casting ice magick as it boosts the power of ice-elemental spells.

The Feral Retriever is a Rank III Mark found in the Spine of the Icewyrm area. The hunt becomes available upon reaching Mt Bur-Omisace, so if the player wishes to fight it with Larsa in the party, they should return to Rabanastre upon reaching the mountain to accept the hunt from a hunt board, because he will leave the party if the player proceeds further in the story. It is petitioned by Hymms in Mt Bur-Omisace.

Fafnir is a Rank VII Mark that roams the section of Silverflow's End accessible from Karydine Glacier during snowstorms, and causes constant rainfall at Mt Bur-Omisace. The hunt becomes available after the events in Giruvegan. The Kiltias Ieeha, who set up the mark for it, took his fellow Kiltias to fight Fafnir, but by the time the player party slays the monster, Ieeha is among those already dead at the monster's hands, with only his ring left behind. His death was not in vain, as Fafnir's defeat and Ieeha's sacrifice inspire a world-weary and cynical viera on the mountain called Relj to aid the residents of Mt Bur-Omisace to begin anew and rebuild what they lost. She is the petitioner for the hunt.

Fafnir is considered the hardest regular mark. Talking with Relj triggers the snowstorm, but the weather will change if the party passes through the Frozen Brook. The player should head to the southwest (left, according to the map) from Mt Bur-Omisace and circle around Frozen Brook toward Silverflow's End (taking a chocobo is most efficient). Another way is to zone in and out of The Feywood until the Paramina Rift is engulfed in a blizzard, and then head straight for Silverflow's End.

The Trickster is an Elite Mark whose hunt becomes available upon reaching Mt Bur-Omisace. Intrigued by the white chocobo that helped stave off vandals who harassed a chocobo flock and vanished as quickly as it came, Gurdy went to petition for the hunt of this elusive mark. After speaking with Gurdy the player should rent a chocobo (though this is not needed to find the mark) from her for 600 gil, then continue down to the Frozen Brook area of the Paramina Rift where the mark will appear. Monid will be waiting. The player can exit and re-enter the area until Monid says the Trickster has appeared (it might take many tries; the spawn chance is only 30% per entry and Monid will not always say when the Trickster has appeared).

To find Ancbolder the player must have spoken to the "Huntmaster" in Phon Coast and defeated Thalassinon, which will trigger the start of the Rare Game quest. Ancbolder can then be found alongside Anchag after defeating all enemies in the Karydine Glacier area (this includes the non-aggressive Wild Onions and the hidden undead). Anchag is an easy source of Damascus Steel, an ingredient required for making Gemsteel, one of the ingredients needed for making Tournesol.

Contrary to popular belief, the player does not need to leave and re-enter the area to spawn Anchag, simply killing all will spawn it at the center-south region of Karydine Glacier. Though the Ancbolder can only be felled once, the Anchag will appear every time the proper conditions are met, but only once per visit to the Paramina Rift. Anchag can be farmed for Damascus Steel.

The party revisits the Paramina Rift after they learn the true location of the Judge of Wings.

The map can be bought in the Sand-strewn Pass for 3,200 gil. 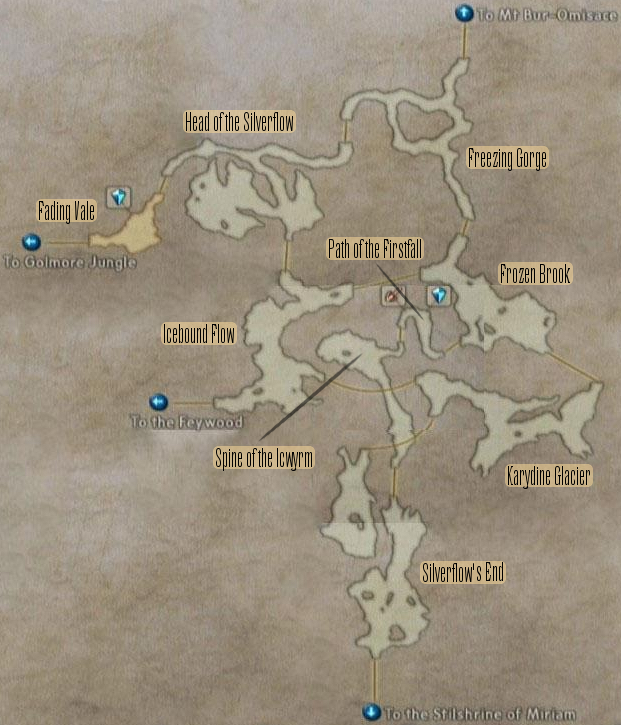 Map of the original version of Final Fantasy XII that includes all treasure information.