Cid Pollendina: Oh, shut up and help me remodel the Pandemonium (Final Fantasy IX) page!
Please expand this article into a full one. The following tasks need to be completed:

So, this must be Garland's haunted mansion... Talk about bad taste in interior decorating.

Pandemonium is Garland's castle in Final Fantasy IX and the place where he docks the Invincible and oversees the soulless Genomes. Referred to as a floating castle, Pandemonium is situated near Bran Bal on the planet of Terra.

It appears organic in design, with eyeballs, scales, horns, fangs and shells in its structure. Atop the Pandemonium rests a large red crystal. Pandemonium's structure is covered in large eyes, some of which seem to follow visitors, giving the impression the structure is alive. This is in juxtaposition to being the place where the dead sleep in stasis. Another place in the game covered in blinking eyes is the final battle arena.

Pandemonium is where the souls of Terra, killed in years long past, lay in stasis, anticipating Gaia's absorption.

Pandemonium is accessed by a transport portal similar to those found within the castle proper. Inside, Garland reveals to Zidane his true purpose as an Angel of Death. Zidane is distressed by the news and tries to attack Garland, but he apparently modifies Zidane, causing him to pass out and altering him to become an "empty vessel", just like the other Genomes. Zidane is left on a throne in a secluded room. His friends come to try to help shake him out of his reverie, but Zidane brushes off their attempts. After several battles where various party members help Zidane defeat various monsters, he comes to grips with himself.

After going through the mazy palace, the party reaches Garland where they battle a Silver Dragon and then Garland himself. Though Garland continues to predict Gaia's eventual decay, the party defeats him, and Garland crawls to the fortress's precipice. The party spares his life, but Kuja enters Pandemonium and battles the party. During battle, Kuja achieves Trance and obliterates the party with Ultima. Trance Kuja declares that he will rule Terra and Gaia in which Garland says that Kuja's power is meaningless. Kuja kicks Garland off the ledge, sending him plummeting to his death. Garland's spirit tells Kuja that he's a defect and that he will last only until the worthy Genome, Zidane, grew. Though Kuja at first does not believe Garland, he realizes that he's a mortal and will die. Not wanting the world to exist without him, Kuja unleashes Ultima to destroy Pandemonium, along with the rest of Terra.

Moorock in Bran Bal has never heard of Mognet, but upon learning of it wants to send a letter to Mozme in Pandemonium:

The theme that plays in Pandemonium is known as "Pandemonium" and is a remake of "Castle Pandaemonium" from Final Fantasy II with a distinctly slower tempo and gothic sound.

During the three battles after Zidane learns of his nature as a Genome, the music that plays is titled "You're Not Alone".

Pandaemonium appears as the Field Music Sequence for "Not Alone".

The member who suggests the party should get on the Invincible depends on who is in the party currently; it can be Freya, Vivi, Steiner or Eiko. 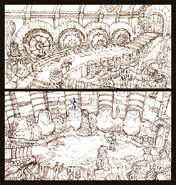 Concept art of an interior area of the Pandemonium. 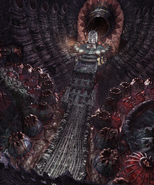 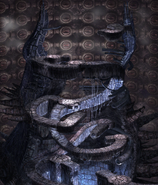 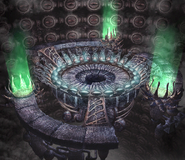 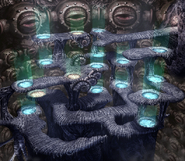 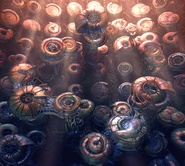 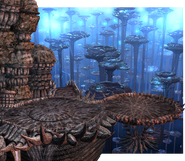