Draw from Fujin or Red Giant

Tetsuya Nomura
Pandemona is a Wind-based Guardian Force in Final Fantasy VIII. It learns Speed and Strength junctions and support abilities to enhance them. It is the first Guardian Force to learn Speed boosts naturally, and also the first to learn an ability that lets the junctioner act first in a battle along with a command that lets the user absorb HP from a target. It doesn't learn any refine abilities; the ability that refines Wind magic is learned by Quezacotl.

Pandemona is a pastel-colored creature. Its body is lavender with colorful aspects. It is bipedal and can suck in air and enemies via its "funnel" up front, storing the contents inside its tail that blows up like a balloon.

Pandemona is drawn from Fujin during the fight in the Balamb Hotel. After drawing Pandemona from her, Fujin stops using Wind magic. If missed, Pandemona can be drawn from Red Giant in the final dungeon. If the player misses both opportunities, Pandemona cannot be obtained in that playthrough. Obtaining Pandemona in the Steam and Remastered versions earns the achievement Pandemona.

Pandemona's attack, Tornado Zone, is a Wind-elemental attack against all opponents. The majority of enemies have a weakness against Wind. Pandemona's summon time is 22.8s, which, according to the Final Fantasy VIII Ultimania, allows the player to boost its damage to around 240% of normal damage using a regular PlayStation controller.

Abilities learned naturally by Pandemona are listed below:

Pandemona is a wind-elemental Level 9 GF Card in Triple Triad used for playing the minigame# and for turning into 100 Windmills with Quezacotl's Card Mod. It is held by the hotel owner in Balamb Town.

Pandemona, along with Typhon and Phoenix, was considered to be a summon in Final Fantasy Type-0 but was discarded. 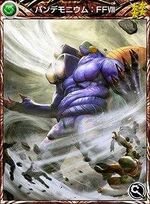 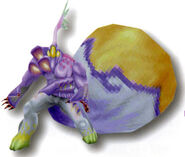 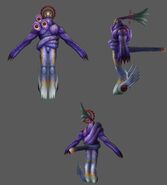 Pandemona as it was set to appear in Final Fantasy Type-0. 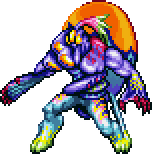 Pandemona comes from the word "Pandemonium," the GF's name in the original Japanese release.

The word's meaning of any loud, chaotic thing, refers to Pandemona's use of a tornado. His use of a bag to unleash his wind powers is more in reference to Fūjin, the Japanese kami of wind who also used a bag filled with wind; gaining the summon from the character of the same name hints to this.

The game's debug menu, only accessible via cheating device, calls Pandemona "Pandemonium," but as the name exceeds the character limit the shortened version is used in the English release.

Pandemona is called Zephyr in the French version, Eolo in the Spanish version, and Pandemon in the Italian version.