The castle that appeared at the time of the emperor's resurrection... It can only be Pandaemonium, the fortress of the lord of Hell.

Pandaemonium, sometimes spelled Pandemonium, is the final dungeon of Final Fantasy II. The capital of Hell, it was initially ruled by Satan until his defeat by the Emperor, and was afterwards risen to the surface upon his return to the mortal world as the Hell Emperor. Its advent destroys and replaces Castle Palamecia.

Many centuries ago, a great hole opened in the world, and many monsters spilled out. After them, the palace of Hell, Pandaemonium, rose from it. The people, fearing for their lives, made the ultimate spell, Ultima. Using this spell, they managed to seal the palace back from where it came. However, the monsters still remained, and the mages who cast Ultima, fearing their new power, went away and founded the town of mages, Mysidia, in a secluded area. Here, they sealed the Ultima Tome away, so that no one else could use its power.

After the party killed the Emperor, his soul, or rather, the dark half of it, goes to Hell. Here, he absorbs the dark powers, and becomes Emperor of Hell. Using his new powers, he is able to raise Pandaemonium to the Earth again, where Palamecia used to stand.

The party travels through the Jade Passage, and arrives in Pandaemonium. Here, they travel to the top and find the Emperor. They manage to defeat him in battle, and with his powers now gone, Pandaemonium once again sinks back into Hell.

- *From the fourth floor, entering through the first door from left to right to the fifth floor, the secret passage is on the lower right of the most northeast part of the room.

Pandaemonium was mentioned as one of the wonders in Final Fantasy Tactics, although the overall description has more similarities to Castle Palamecia than to the actual Pandaemonium. It bears the following description:

The capital of the ancient Palamecian Empire. The towering mountain range encircling the city guarded it from even the most ambitious airship captains. A warping device was the only means of bypassing this natural barrier.

Pandaemonium is the representative arena of Final Fantasy II in Dissidia. Here, Warrior of Light, Tidus, and Firion each battle the Emperor in their respective storylines, and Zidane speaks to Cosmos here. Terra and Onion Knight also have an encounter with Exdeath here, as does Bartz.

The palace is perhaps the most closed-in arena in the game, with many walls, low ceilings, and few open areas. The center of the stage contains a Banish Trap at the bottom of a pit over which hang a handful of small, square platforms. The stage's Ω form causes patches of ground to randomly turn red and black. When this occurs, spikes randomly appear and pierce upwards when the characters battle over these patches of ground, damaging their Bravery by a set percentage and adding it to the Bravery pool. Perhaps fittingly, the Emperor's trap abilities work fairly well here due to the lack of space to maneuver in.

The Demon's Soul is the battlegen item obtained through stage destruction in this area.

Pandaemonium returns as an arena in Dissidia 012. Additionally, the top floor of Pandaemonium appears as a new arena called "Pandaemonium - Top floor". Unlike the Pandaemonium Arena, which is a very closed-in space, the Top Floor is fairly spacious and wide. Numerous crystal formations litter the arena, and can be broken and stood on as platforms.

The Emperor's throne lays against the far wall. Here, the Emperor speaks to Golbez about the Warriors of Cosmos and how they acquired knowledge confidential to Chaos's forces, before telling him about his plans to infuse Jecht with Chaos's powers.

Later in the thirteenth conflict, Zidane reassures the Onion Knight, who worries over the possibility that summoned warriors are simply manikins made into what they are now.

Along with the Crystal Tower, Phantom Train, and the Prima Vista, the top floor of Pandaemonium has no Omega version. Its battlegen item, obtained through stage destruction, is the Palamecian Gem.

A new version of Pandaemonium appears as a stage. It is a faithful recreation of the seventh floor of the original game's dungeon, featuring sloped elevated platforms, destructible pillars, and demonic traps. The brightly colored walls are noticeably darker, and appear more organic and demonic.

In the stage transition, the walls and roof disappear, a thunderous and warped sky can be seen, and crystal spikes circle the stage. As such, the stage is a fusion of both Pandaemonium stages in the PSP versions.

The top floor of Pandaemonium, as it appeared in Dissidia 012 Final Fantasy, appears as the BMS for "Battle 2". 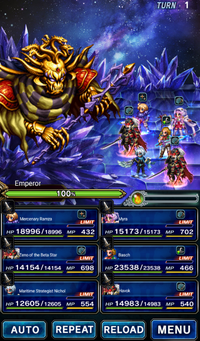 The last floor of Pandaemonium is crystalline, which could be an allusion to the Divine Comedy in which Lucifer, or in this case the Lord of Hell, is at the middle of the lowest circle of hell, the Cocytus, which is a frozen lake.

According to a rebel soldier in the castle of Fynn, the appearance of Pandaemonium on the surface is an illusion and the real castle is still in hell.

In the PSP/iOS version's ending, although the narration mentions that Pandaemonium vanished without a trace, crystals mirroring that of Pandaemonium are seen in the cave. 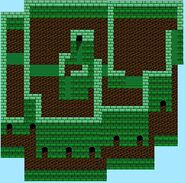 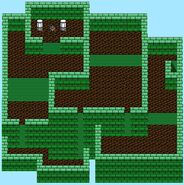 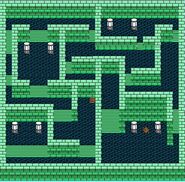 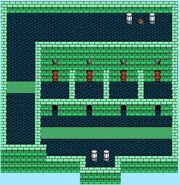 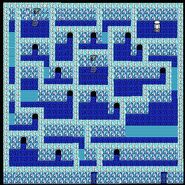 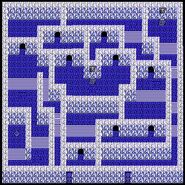 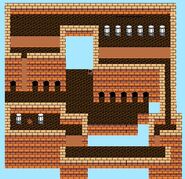 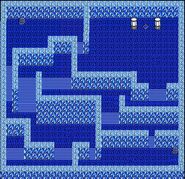 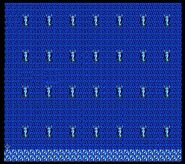 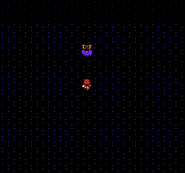 Pandemonium on the world map (PSP). 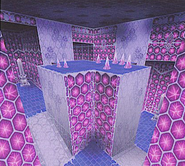