An apprentice Black Mage from the land of Mysidia. Though young, Palom has proven himself a skillful, if arrogant, student of magic...

Palom is a playable character in Final Fantasy IV and its sequel, Final Fantasy IV: The After Years. He is a Black Mage from Mysidia who trains together with his twin sister, Porom.

Palom is a young boy wearing a striped green and white costume, with an orange cloak and green boots. His hair is pulled into a little ponytail in contrast with Porom, who has longer hair and wears the same outfit as her brother, but it is orange instead of green.

In Final Fantasy IV: The After Years, Palom's hair has grown longer and he wears it in a braid with a hair ornament. He still has his costume, which is worn under a blue coat with a shoulder pad and a white scarf with green stripes. Palom and Porom wear matching amulets with contrasting colors—Palom's is red and Porom's is green. They wear these amulets in their artwork and renders, and wear them in-game in some releases. In the 3D versions, his model is depicted as having a near-constant frown.

Palom is a casual show-off, even to adults, and refers to himself as "The Mysidian Genius" or "Prodigy". This, combined with his inflated ego, causes him to get a little out of hand, leading to Porom having to settle him down, either with words or by smacking him on the head.

During The After Years, Palom has matured and at one point tells Leonora not to get too confident, as this is the point where people let their egos sink them. Palom teases Leonora after taking her under his wing, but reveals to have faith and fondness for her by referring to her as his partner. He is determined to find independence from Mysidia on his personal quest to become a Sage like Tellah.

According to the Final Fantasy IV Settei Shiryou Hen, Palom and his sister Porom were learning magic since early childhood, akin to the mages of old, and were sent to study under the Elder of Mysidia by their parents.[2] Palom and Porom first meet Cecil when he visits Mysidia after being attacked by Leviathan. The Elder asks if they will accompany Cecil and help him on his quest to become a Paladin and orders them to spy on Cecil to ensure he stays true to his word. Palom and Porom accompany him to Mount Ordeals, where Palom uses magic to extinguish a fire blocking the route up the mountain.

While climbing the mountain, they meet Tellah the sage, who agrees to help them as he searches for the legendary magic Meteor to defeat Golbez. When they reach the summit they are attacked by Scarmiglione of Earth, one of Golbez's Elemental Archfiends, but defeat him. They arrive at a room full of mirrors, where Cecil overcomes the Dark Knight and becomes a Paladin.

Cecil, Tellah, Palom, and Porom return to Mysidia, where the Elder congratulates them. Palom and Porom reveal to Cecil they were spying on him, but he tells them they were well within their rights. The Elder opens up the Devil's Road that leads to Baron to stop Golbez. Palom and Porom, who are finished with their mission, ask if they can help Cecil and while the Elder is reluctant at first, he agrees to let them do so.

The party makes their way to Baron Castle via the Ancient Waterway after finding Yang. They meet up with Baigan who offers to help Cecil. Palom and Porom smell a monster revealing Baigan as the culprit. Once the party defeats the monster who has taken Baigan's likeness, Palom and Porom warn Cecil to tread lightly around Baron. Cecil meets the king, who is an impostor and is, in fact, Cagnazzo, the Archfiend of Water.

After defeating him, Cagnazzo has one last trick up his sleeve. When the party tries to escape, the walls cave in. Palom and Porom save Cecil's party by petrifying themselves. Tellah tries to heal them, but to no avail, as they have turned into stone of their own will. This act of sacrifice further strengthens the party's resolve to stop Golbez.

Palom and Porom are healed by the Elder, who takes them to the battle with the Giant of Babil and afterward Palom and Porom send their wishes at the Prayer Dais in Mysidia for Cecil. After Cecil's group defeats Zeromus and peace is restored to the world, Palom and Porom go back to their old routine in Mysidia. Palom cuts his magic classes to flirt with a girl boasting about his exploits, specifically, the time he extinguished the fire on Mount Ordeals. Porom finds Palom and brings him before the Elder, who scolds him and gives him extra homework.

He deeply admires the late, great sage Tellah, and now he yearns to become a great sage himself. Now grown, he harbors resentment towards the Elder of Mysidia and his elder twin sister, Porom, who still preach to him as if he were a child. He wishes to leave the rigid confines of Mysidia behind him to travel all over the world in pursuit of his dream.

Shortly after Final Fantasy IV ended, Palom sailed with Porom to travel the world like Tellah. They visited Tellah's and Anna's grave-sites, where he wondered if Anna is what their mother would have been like had they known her. In the Underground Waterway, the twins encountered the Cooler Mammoth and defeated it.

Since Tellah's passing, Palom aspired to follow in his footsteps. He is fed up with the Mysidian Elder treating him like a child in spite of being almost an adult causing a rift between him and Porom, as he intends to leave the rigid Mysidia to travel abroad to become a Great Sage.

Porom schedules a visit to see Rydia with Palom. Palom asks if Rydia can take them to the Feymarch for his training as a Sage. Rydia obliges, but after speaking with Asura and Leviathan, she cannot permit them to pass. Along the way, Palom ignores Luca's attention.

Palom takes an assignment from the Mysidian Elder to train Leonora as an Epopt at the Tower of Trials near Troia. Upon returning to Troia, Palom questions the Epopts over why Leonora had to learn Black Magic, finding it suspicious. Palom later discovers the Red Wings have begun stealing the Crystals again. After crossing through the castle of Troia's underground waterway, he flees with Leonora and the Earth Crystal. They mount a black chocobo and fly to the Lodestone Cavern, where the Red Wings are made to discard their metal weapons.

Within the cavern's Crystal Chamber, they are attacked by the Dark Elf's spirit. After it transforms into a dragon and gains the upper hand, the Dark Elf is destroyed by Shiva, who was summoned by the Mysterious Girl. Palom teleports Leonora away and petrifies both himself and the Crystal. Leonora goes against Palom's wishes and returns to his side before the Mysterious Girl breaks the stone to recover the Crystal.

Leonora heals Palom's petrification, and reveals to him she was the girl he was flirting with at Mysidia many years ago. While Palom acknowledges Leonora is not the best Epopt, he says she passes with flying colors as his partner. They band together to defeat the Mysterious Girl, but are frozen before losing possession of the Crystal.

Palom and Leonora are rescued from Shiva by Rydia's party after Troia is defrosted, and are sent to the Falcon to recover. After the Mysterious Girl flees to the True Moon with the Crystals, they join the party to put an end to the Creator's plans. In the True Moon's Subterrane, Palom eavesdrops on a conversation between Luca, Leonora and Porom. After Leonora admits she likes Palom, he remarks women can be dangerous.

Following the Creator's defeat the party escape the True Moon. The Elder of Mysidia passes on his leadership to both Palom and Porom. Leonora visits them, and abandons her Epopt position to spend more time with Palom to become a Sage.

In Final Fantasy IV, Palom is a playable party member. He has stats weighted towards magic and learns all Black Magic spells (learning them at earlier levels than Rydia). Palom also has two other special abilities, Twincast and Bluff. Twincast allows him to cast stronger spells with sister Porom, while Bluff boosts his Intelligence (increasing his magic damage), which lasts for a limited time in 3D releases, and stacks additively with multiple uses in the Advance and Complete Collection releases. Palom can equip rods, daggers and bows, but is a weaker physical attacker than Rydia.

Palom returns in Final Fantasy IV -Interlude- at level 34 as a playable party member. He has Black Magic, Twincast and Bluff, as in his original appearance.

Palom is a playable party member in Final Fantasy IV: The After Years, and retains his Black Magic and Bluff abilities. Although he does not initially have the Twincast ability, he and Porom relearn it as a Band ability towards the end of the game. Due to his stats, Palom is the most powerful Black Mage at dealing damage, though he lacks Rydia's summons, Leonora's White Magic or Golbez's physical strength. He also has the lowest speed of the game's black magic casters. 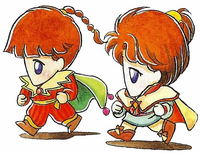 Palom has made appearances in the following games in the Final Fantasy series:

Users in Square Enix Members Virtual World community can make their character appear as Palom, as well as his sister Porom. His name is misspelled as "Parom".