Head of the Space Program

Rate hike! Rate hike! Tra, la, la! And please include our Space Program in the budget!

Palmer is the head of Shinra Electric Power Company's failed Space Program in the Final Fantasy VII series. He continues to act as an executive at the Shinra Company, even if his department is mostly defunct. Palmer is a minor antagonist in Final Fantasy VII, sycophantic toward the company president and generally viewed as incompetent at his job.

Palmer is a short, overweight man with thinning gray hair and gray-blue eyes. He wears a white shirt and a double-breasted, tan-colored suit with matching bow-tie.

Palmer is childish and cowardly, being enthusiastic about everything, but preferring to hide rather than take action himself. He loves his tea with liberal amounts of sugar, honey, and butter (lard in the original translation).

In Final Fantasy VII Remake, Palmer is shown as slightly sadistic, giggling when Hojo suggesting breeding Aerith with candidates from SOLDIER. He is also seen as laidback and irresponsible, skipping his scheduled meetings at the Shinra HQ to enjoy his leisure time at the Wall Market's Honeybee Inn.

After Sector 7's collapse, Palmer is at the Shinra Building with the other Shinra directors. During the executive meeting Palmer asks that his Space Program benefit from the mako rate hike President Shinra wants to enforce. Following Sephiroth's rampage at the headquarters, Palmer confirms Sephiroth's return from where he is found cowering behind a pillar.

Palmer accompanies the new president, Rufus, to Rocket Town to steal Cid's plane. Avalanche intercepts Palmer, forcing him to abandon the plan to battle them. His efforts are in vain, and he is defeated.

Although he is hit by a truck as he tries to escape Cloud and company, he, Palmer with Reeve and Rufus, is one of the few Shinra executives to survive the events of Final Fantasy VII. After Meteor is summoned, Palmer sets the rocket in Rocket Town to auto-pilot to collide with the Meteor, with Cid, Cloud, and the other party members trapped inside. The party uses an escape pod to return to the planet, and Palmer is never seen again.

Palmer visits the Honeybee Inn in Wall Market, and is reluctant to leave when his assistant insists that he has work the next day. After the plate falls, Palmer joins the other directors at the Shinra Building for a meeting. He is getting tea when he sees Sephiroth pass him in the hallway, and is so surprised and frightened he drops his cup. During the directors' meeting, Palmer tries to convince the others than Sephiroth has returned, but is dismissed. He has no objections to using torture to get more "results" out of Aerith Gainsborough or to President Shinra's decision to not rebuild Sector 7 in favor of moving onto the Neo Midgar project.

Palmer is fought as a boss in Rocket Town and can use Mako Gun to cast either Fire2, Ice2, or Bolt2 on the target.

Dummied content for the original game, featuring Palmer in an unused version of the Honey Bee Inn lobby exists in the first Japanese release. By hacking the game, a scene that can never be viewed in the actual game can be played out. The scene's data was removed from all International releases, as well as the Japanese International Version release, which is based on the North American version.

The music unique to this scene is not used anywhere else in the game. The theme was previously unearthed from the game's PC version by hackers, but it was unknown for what scene it was intended. In the scene itself much of the dialogue reads as gibberish, as the game displays the wrong kanji. In the scene, Palmer encounters an undercover Shinra Manager who claims to be visiting the Inn for "marketing purposes." This backfires on him as the Honey Bee lady accompanying Palmer implies he is a regular, something that infuriates Palmer and makes him chase the man out of the inn, followed by the lady.

In the remake, Palmer can be seen inside a private lounge, chasing a honeygirl with a net, as well as outside the Honeybee Inn after Cloud's performance.

According to character designer Roberto Ferrari, Palmer's hand-in-jacket pose in the remake is intended to evoke the French military and political leader Napoleon Bonaparte.[2]

Artwork for the remake. 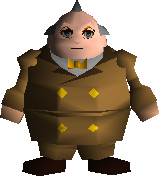 Palmer in a VIP lounge.

Palmer outside the Honeybee Inn in the remake.

Palmer at the directors' meeting.

[view · edit · purge]Palmer is a name that can be either a surname or given name that means a pilgrim to the Holy Land, named from the palm worn to signify the journey. Whether there is any intended association with Shinra looking for the promised land is unknown.