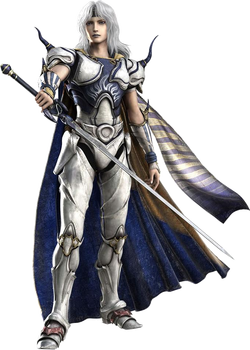 The way of the knight is to defend others.

The Paladin (パラディン, Paradin?) is a special job that appears in several games in the series.

The Paladin is a sacred knight, counterbalancing the Dark Knight. Paladins equip heavy swords and armor and can use special holy swords that have been imbued with sacred power. They can use basic White Magic spells, and can cover allies whose HP are low.

Some games give Paladins the Holy Sword skillset, giving them the power to strengthen and protect allies and attack enemies with holy-themed attacks. As Dark Knights wield the Deathbringer, the holy sword Excalibur is sometimes associated with Paladins. Another common Paladin weapon is the Save the Queen.

Cecil Harvey transforms into a Paladin on Mount Ordeals. He has access to low-level White Magic and can use Cover to take hits in an ally's place; he will use Cover to protect weakened allies automatically. As a Paladin, Cecil gains access to many Holy-Elemental weapons, such as the Lustrous Sword and his ultimate weapon, the Ragnarok, allowing him to do massive damage against undead monsters.

In the Japanese exclusive game novels, Cecil is instead transformed into a Holy Knight (聖騎士, Sei Kishi?) after the events of Mount Ordeals.

Cecil is a Paladin and retains all of his skills as a Paladin from the previous game.

Cecil is a Paladin, retaining his skills from Final Fantasy IV. His son Ceodore Harvey similarly has White Magic and wields heavy equipment. Kain Highwind becomes a Holy Dragoon, the Dragoon equivalent of a Paladin, giving Kain the ability to use White Magic.

Leo Cristophe is officially classified as a General. However, he equips heavy equipment, and bears the Shock ability, all attributes associated with Paladins.

Beatrix is a Paladin and is temporarily playable, as well as being fought as a boss. She has her own skillset, Seiken, which consists of some Sword Arts attacks, and can cast White Magic. The early scenario had Steiner lead a group of paladins,[1] which became the Knights of Pluto in the final game.

Paladins are an advanced job, and are popular "tanks" due to having several defensive skills along with strong armor. They can also cast White Magic.

Basch is given the Paladin job. He uses heavy equipment and swords, and his skillset consists of abilities that protect and strengthen the party.

While a Paladin job class does not appear; Snow Villiers is theoretically the best Sentinel, which acts a bit like "cover", as Sentinels provoke the enemy and defend using guard abilities. Snow also has trademark names for his heavy coats, such as Save the Queen, and even a coat that is named after the job class, Paladin.

Lightning's downloadable scenario, "Lightning's Story: Requiem of the Goddess", gives her a menagerie of new roles, mostly to relate to the 'mythic' theme of her current predicament. Of these, Paladin is her Commando analogue, and compared to many of the other roles at her disposal, performs exactly like the Commando.

Paladin is a garb available for Lightning. Its locked ability is Heavy Guard and its auto abilities are Soul of the Holy Knight, which boosts Magic Resistance by 10% and status ailment resistance by 20%, and Ruinga Guard, which deals magic damage when Lightning guards for a certain length of time. It is obtained by completing the sidequest "The Saint's Stone" in Luxerion.

Gladiators who have reached level 30 can obtain a Soul of the Paladin, allowing them to upgrade into a Paladin. Paladins retain all of the Gladiator weaponskills and abilities, and also gain support skills like Cover, as well as powerful restorative and offensive magic (albeit at a high MP cost).

In the Japanese version, the class is called "Knight" rather than Paladin.

Paladin is a job class available only to humes. Paladins wield knightswords and greatswords in battle. Their action ability involves the aiding of fellow clan members in battle. They have decent stat growth in everything but Speed, and are quite useful in combat. With the correct support abilities, the Paladin can be one of the most powerful classes due to them having access to the most powerful weapons.

Paladin is a job class exclusive to humes. Paladins are tanks, with high HP and Defense stats, but they have low Speed, Evade and Strength. They are well-balanced attacking and supporting units, with their Nurse ability as an effective debuff remover, and their Cover ability invaluable in missions involving protecting a specific unit. Frimelda Lotice is a Paladin.

While Paladins cannot attack monsters, they act like shields, preventing the advance of any enemy, large or small.

This section about a job class in Crystal Defenders: Vanguard Storm is empty or needs to be expanded. You can help the Final Fantasy Wiki by expanding it.

The Paladin job is usable and focuses on defending itself and its allies.

Gawain is a Paladin, and this Warrior of Light job is unlocked with his chapter.

Cecil appears as both a Dark Knight and a Paladin, able to shift forms when attacking. His Paladin form specializes in swift aerial sword combos and light-based magic attacks.

Cecil's Paladin form appears, as well as his Dark Knight form, functioning exactly the same as in the original game.

Kain also makes an appearance with the Holy Dragoon class as his EX Mode.

The Paladin appears as one of Cecil's forms. The Paladin's 2nd form is Cecil's outfit from Dissidia 012 Final Fantasy.

Cecil's Paladin form appears as a separate character alongside his Dark Knight form. They cannot be in the same party (with the exception of friend summons and co-op).

Paladin is a job unlocked with a White Mage level 10, and Monk level 5.

The Paladin from Final Fantasy Tactics Advance appears as an obtainable card.

Paladin is a job unlocked by crafting 15% of all equipment. The Paladin is a high defense tank capable of protecting teammates from all damage.

In the NES version, the Dark Knight was called the Magic Knight (まけんし, Makenshi?, lit. Magic Swordsman) and was obtained from the Water Crystal. The Magic Knight can use White Magic up to level three.

The Paladin class was obtainable by completing the 04:Crests collection. It offers a minor boost to attack and a major boost to defense. It appears on a bronze card.

Glorious Blaze: The Princess of Destiny and the 8 Soldiers[]

To celebrate the initial release, a collaboration was made with Final Fantasy Airborne Brigade wherein the Paladin armor was made available to players for a limited time. 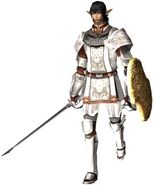 Lightning as a Paladin in Lightning Returns: Final Fantasy XIII.

Hume Paladin in Final Fantasy Tactics A2: Grimoire of the Rift.

Jusqua as a Paladin in Final Fantasy: The 4 Heroes of Light. 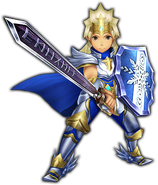 A Paladin in Final Fantasy Explorers.