The Paladin is a light-elemental Eidolon that appears in Final Fantasy Dimensions II. It can be obtained as a signet for the Deathlord to equip by completing his final character episode, "First Magic Corps".

The official description from the free-to-play versions describes the Paladin as a knight that uses holy swords and white magic to defend others. The description also mentions that the Paladin is specifically based on Cecil Harvey from Final Fantasy IV. Similar to Cecil, the Paladin wears silver and blue armor with a cape, and his short silver hair resembles Cecil's sprites from the 2D versions of Final Fantasy IV. His final artwork depicts him wielding the Excalibur and surrounded by holy aura.

The Paladin's artwork for his first and final forms are heavily inspired by the design from Cecil's official artwork by Yoshitaka Amano. His second form's color scheme is inspired by Amano's alternate Paladin artwork of Cecil.

The Paladin's special attack is Sentinel, which allows all party members to negate a single attack. Summoning the Paladin costs 2 bars from the Summon Gauge.

The following are the abilities Deathlord can learn from the Paladin:

In the original free-to-play versions of the game, the Paladin's signet was a god-tier summon that could only be obtained through the game's summon draw shop. The Paladin was an SSS rank summon and could be equipped by any party member. However, it taught the Excalibur Ζ-Ω abilities. In the premium versions of the game, the Paladin's Excalibur ability was renamed to Holy Blade, most likely to avoid confusion with the sword weapon of the same name for characters to equip.

In addition, should the player obtain the Paladin signet from the summon draw shop, they would recieve a costume voucher to obtain a Paladin themed costume for either Morrow, Wrieg, Parai, or the Deathlord. 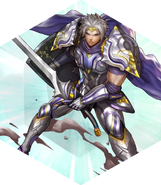 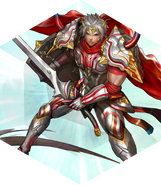 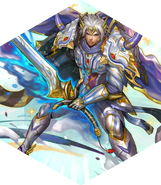 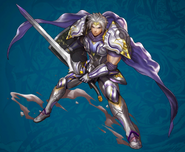 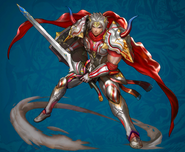