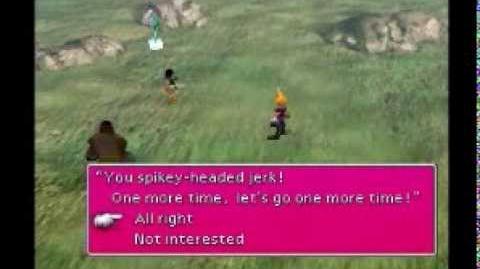 The PHS glitch is a glitch that occurs when acquiring Yuffie in Final Fantasy VII. The glitch lets the player to use the PHS-command and change characters in the party where it shouldn't be possible.

After the Mystery Ninja, aka Yuffie, has been defeated, she will be lying on the grass and a fake save point is nearby. Normally, when the player goes to the save point and enters the menu, both the 'PHS' and 'Save' commands are inaccessible, and after exiting the menu, Yuffie will have run away. To activate this glitch, the player must go to the save point, walk out from it, and enter the menu, where suddenly 'PHS'-command is accessible.

If the player switches the party members, the character models and dialogue of the members they had when entering the area still exist, but when the player answers wrong in the discussion with Yuffie, or enters the menu in the save point, making Yuffie run away, the dialogue of the characters the player changed with the PHS appears. For example, if one changed Vincent to Barret and Yuffie runs away, Barret's lines appear but Vincent's character still stays.