Cid Pollendina: Oh, shut up and help me remodel the Ozmone Plain page!
Please expand this article into a full one. The following tasks need to be completed:

The Ozmone Plain is a location in the land of Ivalice in Final Fantasy XII. It is a vast plain on the continent of Kerwon. A war was once fought on Ozmone Plain and thus the landscape is littered with crashed airships and other ruins.

In Final Fantasy Tactics Advance, there is a similar location named Ozmonfield.

Wide region of plains in Bancour, bordering Dalmasca. Mostly tall grasses, though here and there can be seen volcanic rock formations. In the past, a great battle was fought in the skies over Ozmone Plain. The decaying airshipwrecks punctuating the plains are monuments to the carnage once wrought here.

The Ozmone Plain is located just to the south of the Giza Plains, and are only accessible at first by land during Giza's rainy season or through the Zertinan Caverns. Entrances to Golmore Jungle and the Henne Mines can be found here. The village of the garif, Jahara, is located on the Ozmone Plain.

The name of the area references its resemblance to a snake. It spirals down to the path to The Shred.

The northern half is home to the Enkelados mark, found by killing all Wus in the local area, and returning here.

The southern half of the area with a path to the Henne Mines can only be accessed by riding a chocobo from either Haulo Green, or Field of Light Winds. This half also contains a wayward chocobo for parties that somehow get stuck without means to otherwise return to town.

Through this area, the other side of The Shred can be accessed by following the chocobo tracks.

The area is the anchor point when traveling to the Ozmone Plains through airship. It has a Save Crystal.

After the first events at Eruyt Village, a chocobo may be borrowed here after giving a potion to an imperial.

The Sylphi Entite appears during cloudy weather in Haulo Green and Field of Light Winds. During rain Fire damage is halved and Lightning damage is boosted.

In the Zodiac versions, the treasures are different.

The Enkelados is the weakest Rank II Mark and becomes available after the player can access Ozmone Plain. It can be found in The Shred area and can only be encountered after the player has killed all of the Wus in the area. It is petitioned by low-chief Sugumu in Jahara.

The Bull Croc is found in northern area of The Shred, east of The Greensnake. Once defeated, the rare monster Aeros also appears. Bull Croc has a 20% chance of spawning when the party enters The Shred. Some seconds after defeating the Bull Croc, the Aeros will fly out of Henne Mines. To get it to spawn again after defeating it, one must exit the Ozmone Plain and come back.

To find the Killbug the player must have spoken to the "Huntmaster" in Phon Coast and defeated Thalassinon to trigger the start of the Rare Game quest. The Killbug is found in the area called The Switchback. It is located on the northern edge of the area near the entrance to Zertinan Caverns when the clock is between 10 and 39 minutes. It is easy to spot as it does not match any of the other treasure chests found on the plains, and is larger than usual. This enemy is a Trophy Game, and thus it can never be found again after having been slain.

Note: areas highlighted in yellow can only be traversed while riding a chocobo. 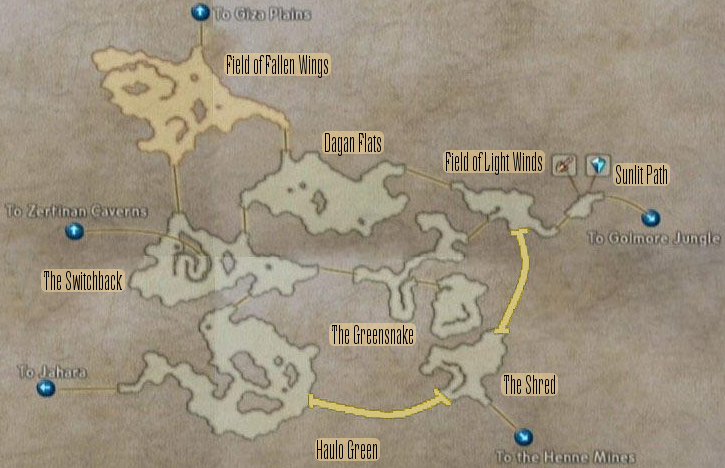 Map of the original Final Fantasy XII that includes all treasure information.

View of an old airship in the horizon.

The party heads to Henne Mines.