Ovjang (アヴゼン, Avuzen?) is one of the two personal Automatons of Aphmau, the Court Puppetmaster of Aht Urhgan in Final Fantasy XI. She is very talkative and energetic, and has a characteristic "girlish" pose, even though she uses the common Stormwaker Automaton frame. She also shares a communications link with her counterpart, Mnejing, which allows Aphmau to view what the other puppet is seeing via a monitor under their helmets.

Ovjang was built by Empress Jubleel, mother to Nashmeira (Aphmau's true identity). A talented Puppetmaster herself, she used the powers of the Gordeus, a mysterious artifact located in Walahra Temple in Aht Urhgan, to design a form of advanced programming which allowed Automatons a greater degree of autonomy, all the while making it easier for their handlers to control them. Moreover, both Ovjang and Mnejing were given behavioral patterns meant to resemble Empress Jubleel and Emperor Jalzahn respectively.

Ovjang accompanies Nashmeira wherever she goes. She notably travels with her in order to discover the secret of the Black Coffin. This leads to her kidnapping by the Mamool Ja on orders from Luzaf, who hopes to study her mechanisms in case they prove useful for his plans. Nashmeira refuses to abandon her and follows her to Luzaf's ship alongside Mnejing. After Luzaf and Nashmeira are captured by Razfahd, the latter orders Ghatsad, the Imperial Puppet Engineer, to scrap both Automatons in order to use their parts and the advanced programming that went into them to complete a mechanical body for Alexander to manifest in. After Alexander's defeat, Ghatsad manages to repair and improve them both, presenting them to Nashmeira during her coronation (although he actually had to melt the crown to complete the repairs).

Ovjang was added in Patch 2.3 as a large Mammet that has been colored to match the Final Fantasy XI version's maroon. It prowls Central Thanalan as a B-rank hunt mark.

Ovjang, along with Mnejing, make their appearance in the Lost Chapter Royal Puppeteer. The two Automatons have been wandering around the worlds until they encounter Kuja, who leads them to Aphmau.

She and Mnejing support Aphmau in battle should she have the EX Ability Activate & Imperial Authority.

Ovjang appears alongside Aphmau as her weapon. 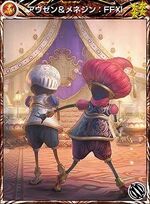