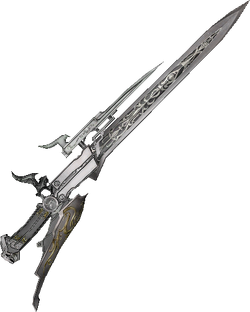 A blade forged for the knight who would watch over Valhalla in the goddess Etro's place.

Overture (オーバーチュア, Ōbāchua?) is a gunblade associated with Lightning's Final Fantasy XIII-2 appearance, which has become known as the Knight of Etro. Outside of its original appearance it's usually depicted as a sword.

While not named in-game, Overture serves as Lightning's iconic gunblade, capable of switching between sword and gun modes, similarly to gunblades from Final Fantasy XIII. She wields it while playable in the prologue, in the Lightning's Story: Requiem of the Goddess downloadable content and as a Paradigm Pack "monster" ally in her Knight of Etro appearance. The weapon was granted to her by the goddess Etro when Lightning was made her champion.

While her previous weapon was kept in a holster slung from her belt, Lightning's new gunblade can be summoned and dispelled whenever she desires, similar to how the party uses weapons in Final Fantasy XV.

Overture is a sword available to PlayStation 3 and Xbox 360 players who own a save file from Final Fantasy XIII-2 on their console, and PC players by default, although they need to enable DLC and can only acquire it via Rewards Barter Shop in the menu. The first copy is provided for free, but subsequent copies cost 200,000 gil. Overture raises maximum HP by 500, Strength and Magic by 280, and comes with the auto-ability Arsenal of One which increases the damage and absorption rate of Army of One.

The Overture is one of Lightning's unlockable weapons. It can be obtained either by random chance when redeeming a Treasure token, or by purchasing them from the Shop for 7,200 Gil. Like all other characters' weapons, having it equipped carries no advantages or disadvantages.

Overture is a exclusive weapon for Lightning. It allows her to use her EX Ability, Army of One

Overture is a rarity rank 4 sword.

A gunblade-type weapon from a distant world. The blade boasts an intricate carving, and although mainly meant to be used as a sword, it can also be used as a gun. A goddess's knight who continuously fought in Valhalla, the unseen realm, is said to have wielded this sword.

Overture (FFXIII-2) is a sword that is obtained as the Super Trust Master Reward from Lightning (FFXII-2). It provides 74 ATK and 158 SPR.

Lightning using the Overture as a gun in Final Fantasy XIII-2. 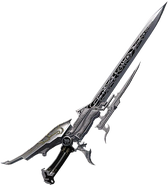 [view · edit · purge]Overture in music is the term originally applied to the instrumental introduction to an opera. The word overture means opening or introduction.