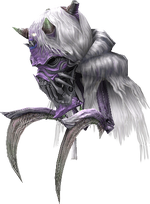 An undead skeleton born from a coalescence of hatred. Petrifies enemies with its Dread attack.

Oversoul (オーバーソウル, Ōbāsouru?), also known as Over-Mind and OverMind, is a recurring enemy in the series.

Oversoul is an enemy fought at Phantom Train. It is a dangerous foe, as when paired with enemies it will use Dread Gaze every other turn to inflict Petrify, and when alone will use Insanitouch to inflict Confuse. Defeating them first should be the player's priority.

Oversoul is an enemy fought at Necrohol of Nabudis. They will spawn up to six times within the dungeon, at which the point the player must leave and return in order to respawn them. They will only spawn when defeating a set number of enemies, with the required enemies decreasing the more Oversouls are defeated. Defeating all six Oversouls will spawn the Rare Game Helvinek. Like all enemies of its type, it can reduce MP to 0 with Annul and inflict Instant Death via Dimensional Rift.

A demon that harvests souls for the lord of the dead.

Oversoul is an enemy of the Deathscythe species, being the strongest of its kind. It is the boss of the mission Sleepless Nights. Oversouls have access to all of the Nightmare command skills, but only access to Darkga and Invert from the Dark Magick skillset.

This section about an enemy in Final Fantasy Tactics A2: Grimoire of the Rift is empty or needs to be expanded. You can help the Final Fantasy Wiki by expanding it.

This section in Triple Triad is empty or needs to be expanded. You can help the Final Fantasy Wiki by expanding it.

[view · edit · purge]In New England transcendentalism, oversoul is a spiritual essence or vital force in the universe in which all souls participate and that therefore transcends individual consciousness. Oversoul can also be the universal mind or spirit that animates, motivates, and is the unifying principle of all living things. It's a concept in the transcendentalist philosophy of Emerson and others.

[view · edit · purge]In science fiction, an overmind is the leading or controlling mind in a group mind.

Enemies
Retrieved from "https://finalfantasy.fandom.com/wiki/Oversoul_(enemy)?oldid=3240763"
Community content is available under CC-BY-SA unless otherwise noted.