Overlord is a Rank VI Mark from Final Fantasy XII. The hunt can be undertaken after the events in Draklor Laboratory are complete. The Overlord can be found in the Doubt Abandoned area of the Sochen Cave Palace. Insecure Seeq will also attend the battle, but will be defeated almost immediately.

It is also fought in the Zodiac version's Trial Mode at Stage 72 along with Diabolos and Avenger. When fought in the Trial Mode, the following pieces of equipment can be obtained from it: Blazer Gloves (common steal), Zwill Crossblade (uncommon steal), Shikari Nagasa (rare steal), and Mina (rare poach).

Fearsome are the indescribable, formless Horrors, yet more fearsome still are those who mock the Form of Man, such as this headless Giant living in the darkest Reaches of the Cave Palace where no Light ventures. Originally a two-headed Guardian of the Gates of Hell, its Fortunes changed when one Head turned against its Master, and both were taken in Punishment, its body then being cast upon the Earth to suffer. It is said that only a true Warrior may best one of these, and so did a Seeq post a Bill in Hope of finding a true Warrior to act on his Behalf.

Insecure Seeq will assist the Party.

Insecure Seeq will assist the Party.

The Insecure Seeq assists the party in battle, but he is weak against Fire and falls in one shot from Overlord's Pyromania, which deals 2,500–3,000 Fire damage with 21 Magick Resist. The Overlord's normal attacks deal around 1,000 damage with the right Defense.

The first move should be to dispel Overlord of his status enhancements, but not without previously buffing the team. At least one character should use either ranged weapons or magicks as not to take damage from Overlord's field attacks.

The Nihopalaoa+Remedy will make the fight easy due to Silence, but Overlord is not immune to Disease and the team will not be able to see his HP. 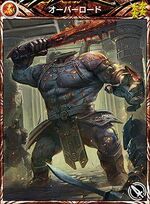 Battle with Overlord.
Add a photo to this gallery

[view · edit · purge]An overlord in the English feudal system was a lord of a manor who had subinfeudated a particular manor, estate or fee, to a tenant. The tenant thenceforth owed to the overlord one of a variety of services, usually military service or serjeanty, depending on which form of tenure (i.e. feudal tenancy contract) the estate was held under.

Retrieved from "https://finalfantasy.fandom.com/wiki/Overlord_(Final_Fantasy_XII)?oldid=3263480"
Community content is available under CC-BY-SA unless otherwise noted.