Would that I were born no princess.

Ovelia Atkascha is a major character in Final Fantasy Tactics. She is involved in various schemes that result in her being used as a tool by the nobles to gain their hold to the Ivalician throne.

Ovelia has a long pale braided blond hair with two long fringes and brown eyes. She wears a long-sleeved high-neck white dress with a brown spear linings at the edge of her skirt and a long red cape. Ovelia's dress and cape are reminiscent of the recurring White Mage job.

Ovelia has a gentle heart, and fulfills her duty as princess. She is inexperienced and naive and unsure whom she can trust, knowing those around her seek to exploit her status as the princess. This culminates into her becoming bitter and angry towards those she deems have betrayed her trust.

Ovelia was born the daughter of King Denamda II, and is half-sibling of King Ondoria Atkascha III by different mothers. Following the death of Ondoria's second son she was adopted by the king as his daughter. With the birth of Prince Orinus Atkascha, Ovelia was brought up by Duke Goltanna and sent to a monastery. She recalls vividly the skies she could only see through the convent walls. She had met Alma Beoulve, a girl from a noble family, and before long was sent to another monastery, the Orbonne Monastery, to study with Simon Penn-Lachish.

Ovelia is key to Duke Goltanna's plans to become the Regent of Ivalice, and she is taken to Orbonne for protection. She is guarded by her bodyguard Agrias Oaks and the mercenary Goffard Gaffgarion. Ramza Beoulve, as part of Gaffgarion's mercenary group, is also assigned to protect her.

Delita takes her east towards Fort Besselat but runs into trouble at Zeirchele Falls, and Ramza, Agrias, and Gaffgarion catch up to them. Gaffgarion betrays Agrias, and reveals he was hired by Dycedarg to dispose of Ovelia, as her existence is preventing Larg from becoming the regent. Delita has taken a liking to Ovelia and protects her, allowing her to fight as well. Ramza remains true, and Gaffgarion and the attacking knights are defeated. Delita allows Ramza to take Ovelia with him and departs.

Ramza and Agrias escort Ovelia to Lionel Castle where she is left with Cardinal Delacroix of the Church of Glabados. This proves to be a mistake, as Delacroix has his own ill intentions. Ovelia and Agrias are taken prisoner, but Agrias escapes and rejoins Ramza. Delita, who has also infiltrated the church, later arrives, as does Folmarv Tengille, leader of the church's Knights Templar.

Folmarv and Delacroix interrogate Ovelia and claim she is not the princess and the real Ovelia had died as a baby. They posit that the council, not wanting Queen Louveria to have a hold on the throne, took her, a child of unknown parentage, and gave her Ovelia's identity. Whether this is true is never determined though one might assume it is, since Folmarv had no reason to lie at that point. A confused princess is easier to manipulate, however, so Ovelia might have been told a lie to shake her confidence.

Delita takes Ovelia away from Lionel Castle and delivers her to Goltanna who places her on the throne so he can be her regent. Larg attempts to enthrone Prince Orinus in Ovelia's stead, and the War of the Lions breaks out.

Following Goltanna's assassination by Delita at the Battle of Fort Besselat, Delita consolidates his power among the Order of the Southern Sky. He stages Cidolfus Orlandeau's death, but allows him to live so he can help Ramza destroy the Lucavi, a group of demons that has infiltrated the upper echelons of the church to orchestrate a war in Ivalice.

She reunites with Agrias along with the knights working for her, Lavian and Alicia, at the chapel ruins, and is relieved Agrias is helping Ramza. When Delita arrives, Agrias calls him an unmannered dog due to him calling Ovelia by her name instead of princess. Before Agrias departs, she gives Ovelia a dagger as protection, surprising Delita.

Delita and Ovelia marry, but Ovelia becomes troubled over time and loathes Delita for using her and others to get to the top of the power chain. On her birthday Delita looks for Ovelia in the chapel ruins where they first met years ago. He brings her flowers to cheer her up, but she snaps and draws her dagger to stab him. Though wounded, Delita retaliates by stabbing Ovelia with the same dagger. She collapses on the floor, and Delita is left to wonder what sort of life his deceptions have weaved for him.

Ovelia is a guest character in the battle at Zeirchele Falls, and starts at level 5 with 53 Bravery, 72 Faith, and equipped with the White Staff, Wizard's Hat, and Wizard's Robe. She comes with the Holy Magicks command, while her other abilities are randomized.

In the PlayStation Portable/mobile remake, Ovelia appears as a guest character in the second battle at the falls, which occurs after the first battle at Lionel Castle. Here, she is level 20 with 53 Bravery, 72 Faith, and comes equipped with the Mage's Staff, Celebrant's Miter, White Robe, and Elven Cloak. She keeps her Holy Magicks command, and also comes with the White Magicks command and the abilities Counter Tackle, Safeguard, and Move +1.

Later in the remake, Ovelia is yet again a guest character in the Zeltennia Castle Chapel's Ruins battle, which takes place after the Walled City of Yardrow battle, and is again level 5 with 53 Bravery and 72 Faith. She comes equipped with the Mage's Staff, Golden Hairpin, White Robe, and Elven Cloak. She no longer has access to Holy Magicks, and comes with the White Magicks command as well as the abilities Counter Tackle, Reequip, and Move +1.

When fought in the fourteenth Rendezvous battle: Brave Story, she is level 99 and starts with 53 Bravery and 72 Faith. She is equipped with the Mage's Staff, Cachusha, Gaia Gear, and Red Shoes, and comes with the Holy Magicks and Time Magicks commands, as well as the abilities Ignore Terrain, Arcane Strength, and Soulbind.

"Arm of the Queen"

Ovelia has three themes to her name. "Arm of the Queen" (オヴェリアのテーマ, Overia no Tēma?, lit. Ovelia's Theme) is her main character theme that relies heavily on wind instruments and strings. It starts fast and cheerful, yet progresses to a slow and melancholic tune in the end. A variation, "The Queen's Slippers," removes the fast and cheerful tune.

Another track associated with Ovelia is "The Queen's Do" (オヴェリアの不安, Ovelia no Fuan?, lit. Ovelia's Anxiety), a more melancholic tune than her original theme and interwoven with Delita and Ramza's motifs. The instruments used include the chime of church bells.

Ovelia's motif can be divided into three parts. The first part is often alternated and appears in other tracks very frequently, these include "Prologue Movie", "Pray", "Game Over", "Antipyretic", "Shock!! ~Hopelessness" and "Cry of Pain!"

Ovelia has appeared in the following games throughout the Final Fantasy series:

Ovelia has made key guest appearances in the following non-Final Fantasy media: 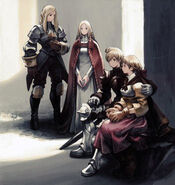 Artwork of Delita and Ovelia.

One of Ovelia's initial artworks.

CG render from War of the Lions.

Close-up in an FMV from War of the Lions.
Final Fantasy Tactics characters
Community content is available under CC-BY-SA unless otherwise noted.
Advertisement