Osmose (アスピル, Asupiru?, lit. Aspir), sometimes translated as Psych, Asper, Aspir, or Syphon, is a recurring spell in the series. It is normally associated with Black Magic. The spell absorbs MP from opponents. Many bosses and magic-using enemies will cast Osmose (or something similar) on a player character if they are getting low on MP. It works in reverse or not at all against undead. It has an upgrade in the form of Osmoga.

Osmose is a Black Magic spell which transfers MP from one or all enemies to the caster. This is reversed when casting on the undead. The amount of MP transferred depends on the spell level. At a high spell level, Osmose can be incredibly powerful. Any character can learn Osmose by having them use the Osmose Tome (Osmose Scroll in Origins).

In the NES version, Osmose (called ASPL) does not work as intended. It will restore the caster's MP even if the target does not have MP. This makes it incredibly overpowered, essentially making the caster has infinite MP provided they can cast it.

Osmose VIII is exclusive to the Wizard, while Osmose XVI can be cast by Hecteyes and Mega Parasite.

Rydia, Palom, Tellah, and Fusoya can cast Osmose (also called Psych). It has a casting time of 5 and costs 0 MP. Osmose often only absorbs 1 MP from the enemy, as that is the amount of MP most enemies have. A few enemies, like Red Dragon, allow the caster to gain 100 - 150 MP. It can also be cast via using the Lilith Rod as an item in battle.

In the 3D releases, Osmose is much more effective and can drain up to 99 MP from enemies, although some enemies are still immune. It also costs 5 MP to cast instead of 0. In all releases, a good idea is to use Osmose on Cecil and Edge, as they are primarily physical attackers whose magical abilities are negligible, and they thus have little use for MP.

In the Easy Type version, its casting time was reduced to 1 and its base power was increased to 20.

Osmose is a Black Magic spell that absorbs MP from on target and restore own MP at the cost of 0 MP. It is known initially by the imposter Rydia and Rydia and learned by Palom (level 40).

Osmose steals MP from a target and restores the user's MP by that amount. It is learned by Palom (level 25), Rydia (level 26), Golbez (level 32), Leonora at level 39), and Fusoya (initially).

Osmose (Asper on PlayStation) is a Level 6 Black Magic and Spellblade spell. It can be bought in Phantom Village for 10,000 gil, and costs 1 MP to cast. It is one of the spells that can be cast from the Wonder Wand for free, and is an Added Ability to the Lilith Rod.

Osmose can be cast by Aspis, Enuo, Farfarello, Mini Magician, Ramuh, and Soul Eater. The player may utilize this ability by catching and releasing a Farfarello.

Osmose is an effect spell that can be learned from Zona Seeker at a x15 rate and Shiva at a x4 rate. It is one of the most potent forms of the Osmose in the series: Osmose absorbs enough MP from the target to replenish the caster's own MP to full, provided the target has enough MP to do so. There are also many enemies that can be killed by bringing their MP down to 0.

The enemy ability Aspil is a magical attack that reduces the MP of the target and adds the same amount of MP onto the original caster's, for the price of 1 MP. It is used by the bosses Gi Nattak and Lost Number, by Killbin in Whirlwind Maze, and by Christopher in Northern Cave.

Although not available through a spell, characters can absorb MP from targets through the Ghost Hand item. It absorbs a number of MP from a single target, and adds the MP onto the original caster. When the item is used on an undead enemy it has the reverse effect and the user will lose MP while the target will gain.

The MP Absorb Support Materia can be used to absorb MP from targets. When an ability on the Materia the MP Absorb Materia is paired with is used, the caster will get 1% of the HP amount inflicted on the enemy back as MP.

The Magic Hammer appears as an enemy ability and an enemy skill also will leech up to 100 MP from an enemy for an MP cost of 3.

Osmose absorbs a small amount of MP from an enemy. It requires no MP to cast, and is a rank 3 Magic Materia. It can be bought from the Sector 8 Materia Shop for 4,000 gil, stolen from G Blader and G Slayer, or found during mission 8-4-3.

Vivi can cast Osmose Black Magic spell, learned through the High Mage Staff and Gaia Gear. It costs 2 MP to cast, 70 AP to learn, and has a spell power of 15. It cannot be reflected and works with Return Magic. Both incarnations of Tiamat and Ozma can use the ability Absorb MP, which damages its target's MP amount and adds it to its caster.

Drying out the enemies' MP is ineffective to prevent them from casting magic spells because they all possess the auto-ability No MP Cost innately. Their MP pool only functions as dictating how much MP player characters can drain.

The damage from Osmose is considered neither physical or magical, instead falling into "special" damage category. This means it will be unaffected by Protect or Shell.

MP Absorb is an ability learned by the Black Mage dressphere.

Osmose is an Arcana spell cast by equipping the White Tome or the Black Tome, which also decrease cast time of White Magic and Black Magic respectively by 40%, or by equipping the Covetous Garment Grid, and changing dresspheres so as to pass through its red gate. Various enemies are capable of casting this spell.

Aspir is a Dark Magic spell that absorbs an enemy's MP. The potency of the spell depends primarily on a character's Dark Magic skill. Like all absorption spells, Aspir is ineffective on undead. Additionally, a large number of monsters have 0 MP, thus rendering the spell ineffective. The Aspir scroll can be obtained in the quest Making the Grade in Windurst, or purchased from the player-stocked auction house.

In the Zodiac versions, Syphon is listed as Green Magick, its license being Green Magick 3 along with Bubble. It can be used by all four mage job classes: White Mage, Black Mage, Time Battlemage, and Red Battlemage. It can be purchased from the Clan Provisioner in the Muthru Bazaar for 3,800 gil.

The formula for MP absorb is as follows:

As demonstrated above, Syphon ignores the target's Magick Defense.

A spellblade technique that absorbs the target's MP even as it restores the user's.

"Under the name spirits, share all magic in nature! Aspel!"

Osmose is an ability of the Templar class, learned for 100 JP. It drains MP from one target with a range of 4 for 2 MP.

Syphon is a spell learned by the Arcanist for 300 AP from the Terre Rod, costing 12 MP to cast and has a range of 4. An upgraded version, called Syphonja, is used by Neukhia, which fully depletes all enemy units' MP.

Shoot a magical missile that deals damage and steals AP from enemies.

Syphon is an active ability that uses dark power to absorb AP from a single target. It can be used by Deathskull, DemiVampire, Magic Jar, Ramuh, and Undead Princess★.

One of Rem's cards can use her Aspir Venom from Final Fantasy Type-0. For discarding a Rem card and paying one Wind CP, Aspir Venom deals 2000 damage to all the opponent's Forwards, and the player's Forwards gain 2000 power until the end of the turn.

Aspir is a Black Magic spell that absorbs MP from one target in Bravely Default and Bravely Second. Both the user and target will take MP damage if used on an undead enemy. It costs 1 MP to use.

Osmose1 cast on all enemies in Final Fantasy II (GBA). 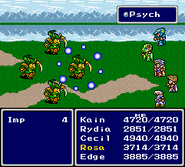 The After Years (Wii).

Syphonja in Final Fantasy Tactics A2: Grimoire of the Rift.

This gallery is incomplete and requires Final Fantasy Record Keeper [Type-0 SB] added. You can help the Final Fantasy Wiki by uploading images.

The original name, "Asupiru" (or "Aspir"), is likely an abbreviation of the word "aspirate", meaning "to draw in by suction", or the French version of that word, "aspirer", with the same meaning.