A haven, yea. Yet it must fall ere we be saved. Too frail a shell, and humans should not thrive. Too stout a shell, and they would not die. Slaughter and salvation! Two irreconcilable Focuses we bore. Yet bound were we in a cocoon prison impervious to our power. And so we thank you, for granting us our longed-for birth. We are the Abandoned One, born but now to die. Our name is Orphan. By our hand, the world shall know redemption.

Orphan is an antagonist in and the final boss of Final Fantasy XIII. Orphan is a wheel-like fal'Cie with a pivotal rule in sustaining Cocoon. It rests within Orphan's Cradle in an area known as Narthex Throne. Residing within a pool in a deep sleep in a state of unbirth, Orphan is the main power source to fal'Cie Eden, enabling it to siphon power from other fal'Cie to keep Cocoon afloat.

This mysterious being fuels the fal'Cie Eden with the power necessary to maintain Cocoon's complex operational systems, and as such, its death would bring about Cocoon's certain destruction. Nevertheless, its death is what Barthandelus desires, for he seeks to offer the lives of the world’s millions of inhabitants in sacrifice to call the vanished Maker back to this realm.

As Sanctum fal'Cie and l'Cie are themselves incapable of harming Orphan, Barthandelus requires the assistance of Pulse l'Cie. If they can transform into Ragnarok and destroy Orphan, Cocoon's demise will be assured.

Orphan is an angelic fal'Cie that has a cherub face with large eyes. When it first appears, Orphan has assimilated the lifeless body of Barthandelus as a shell that resembles the image of parents cradling the child that is Orphan's face. The masculine entity, Barthandelus's remains, is purple with a glowing red eye. The feminine figure, the fal'Cie's impression of their creator, Lindzei, is white and gold with a large halo with crests of Lindzei's symbols on the edges, six golden wings reminiscent of a seraphim, and a long serpentine tail with Lindzei's crest at the end. The tail has Latin writing on it, Viator elamentabilis Ragnarok ("Melancholy Traveler Ragnarok"), in Cocoon alphabet. In this form, Orphan speaks through the faces of its shell, referring to itself with plural pronouns. When Orphan's first form is introduced, it refers to itself as "The Abandoned One".[1]

As explained in Final Fantasy XIII Ultimania Omega, Orphan's first form represents an image of "parents" conceived by Barthandelus with the motherly figure representing Lindzei. This mirrors classical Renaissance art depicting the Biblical Madonna and Child, emphasized by the Holy Mother of Lindzei being the center of the great wheel, giving her a golden halo. The script engraved on the blade-like structure of Orphan's first form is a revised version of the lyrics to "Fighting Fate".[1]

The parental figures disappear in Orphan's final form. The theme of abandonment is present in the symbolic transition to its true form, and can be seen in Orphan's position as a fal'Cie, its infantile visage, and its boss themes, "Born Anew" and "Nascent Requiem". Orphan originally residing in a pool inside a dimension created by the fal'Cie Eden in a state of unbirth, could symbolize a fetus in amniotic fluid.

Etro's gate looms behind Orphan's final form, and when viewed from the front, Orphan's body and the gate form the appearance of an eye. Orphan's true form is a cherubic face set in the center of a golden wheel with golden faces and Lindzei's symbol on the edge. Orphan's final appearance and name allude to the Ophanim (singular form: Ophan), a class of celestial beings described in the book of Ezekiel that guard the throne of God, and are depicted as fiery, eye-covered wheels.[1]

When staggered the wheel disappears and Orphan gains arms. Lindzei's symbol is emblazoned on Orphan's lower half, and the symbols hang on chains from each of Orphan's arms. A larger symbol of Lindzei is set on Orphan's forehead (or behind Orphan's head in the concept art), and above it the text Viator elamentabilis Ragnarok repeats with the symbol of infinity in the middle. Orphan's entire form when staggered resembles the Lindzei symbol with the white structure that replaces the golden wheel taking on its shape.

Orphan's desire to be reunited with the fal'Cie's Maker is the same as Barthandelus and the other fal'Cie's. Lightning states that Orphan had given up on life long before even being born. Displaying some of Barthandelus's personality aspects, Orphan can be sadistic, as seen when it tortures Fang. In its true form Orphan appears more immature and speaks with a higher pitched voice. When Lightning leads the party into the final battle, announcing they will make the impossible possible and save Cocoon, Orphan shrieks in rage, perhaps alluding to a more infantile personality than that of Barthandelus.

The other Cocoon fal'Cie share Orphan's desire to be with their creator and orchestrate an event where Pulse l'Cie can become Ragnarok and destroy Orphan. Their goal is to send Cocoon plummeting to the surface of the lowerworld, Gran Pulse, so Etro's gate would be opened by the passing of countless extinguished lives. After Lightning and her party of Pulse l'Cie defeat Barthandelus, Menrva dives into the pool to birth Orphan. Assimilating Barthandelus's dying body into its form as it rises, Orphan thanks the group for giving it life. It overpowers the l'Cie while demanding Vanille and Fang to complete their Focus.

Orphan tortures Vanille to provoke her transformation into Ragnarok. Pained by the sight of her suffering friend, Fang offers to fulfill Orphan's wish, and Orphan releases Vanille. Lightning and the others try to stop her but turn into Cie'th. Fang transforms into Ragnarok and destroys the barrier protecting Orphan, but is unable to defeat the fal'Cie and reverts to her human form. Disappointed, Orphan tortures Fang and heals her wounds before resuming the torture to force her to become Ragnarok again.

Vanille, intending to fight the fal'Cie, refuses Fang's pleas to run. Lightning and the others turn back into human form and destroy Orphan's shell. Sinking into the pool, Orphan emerges in its true form as it tells the l'Cie that they overreach themselves. Lightning declares they will defeat it and save Cocoon. Following the fight, Orphan sinks back into the pool as the other Cocoon fal'Cie lose power with its death. Cocoon begins to descend, but Fang and Vanille become Ragnarok together and erect a crystal pillar to suspend the floating continent above Gran Pulse.

Orphan is fought as the game's final boss in two states. The first uses a blade-like shell created from Barthandelus with elements of the fal'Cie's impression of Lindzei whose face is also present on the wheel's plates on Orphan's back. After the shell is destroyed, Orphan assumes a near-invincible wheel-like form that is only weakened when staggered.

In its true form, Orphan is at level 51 and has 3,390,000 HP, while its previous form is exactly double that amount. Its incredible defense makes for a challenging final battle even while losing half of its total HP. If Orphan's first form is taken into account, the total hit points equal 10,170,000, making Orphan the final boss with the most HP in he Final Fantasy main series, a record previously held by Safer∙Sephiroth‎ with a maximum of 400,000. However, the damage cap and the player's damage-dealing potential are also much higher than in other games.

Orphan's battle themes are "Born Anew" for its first form, and "Nascent Requiem" for his second form.

In the heart of Cocoon, Orphan provides for its people while dreaming of their destruction. The countless lives he has helped support will be sacrificed with joy, unless the fury of the l'Cie can stop him as they fight for survival.

Orphan appears as an enemy.

This lonely deity has the most amazing three-way conversations in all of Cocoon.

Orphan is the final boss of the Archylte Steppe Premium World. He uses Merciless Judgment against the party, and drops the Omega Weapon for Lightning.

Its in-game description refers to the fal'Cie Eden which Orphan uses to communicate with the Cocoon populace. 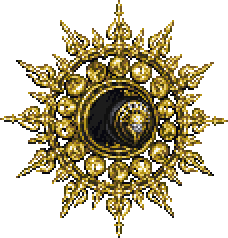 Orphan appears as an ability card in Mobius Final Fantasy. 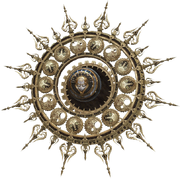 Orphan's battle models were designed by Chikako Nakano. The Final Fantasy XIII Ultimania Omega reveals the planning side told Nakano he was free to do what he wanted, except for two points: Orphan was to appear as a child after its transformation; before Orphan transforms, the developers wanted it to be extravagant. For Orphan's first form, Nakano used an orphan's parents as the motif, having the transition from shelled form to true form give meaning of "an orphan being born from the loss of parents".

Initially Nakano had heard Dysley would transform into Orphan, so on the first form's right side Nakano included a face that resembles Barthandelus. The mother on the left side is Lindzei as Dysley envisions it, but it differs from the god's actual appearance and is more sinister.

Orphan's final form, when staggered, can be defeated by the Instant Death effect by Vanille's full ATB skill, Death. As explained by battle planner Nobuyuki Matsuoka in Final Fantasy XIII Ultimania, this is done to pay homage to The Final Fantasy Legend where the final boss can be instantly defeated with the weapon Chainsaw, which may inflict instant death.

that has a wheel with Etro's gate motifs, similar to the wheel Orphan has. Orphan's first form also makes a cameo appearance in Final Fantasy XIII-2 in a flashback where Lightning falls through the Historia Crux. However, Orphan is only mentioned once by Hope when in the Yaschas Massif.

Orphan is voiced by Hiro Shimono in the Japanese version.

He is voiced by Michael Sinterniklaas in the English version. He shares his English voice actor with Jackal from Bravely Default.

His first form in both languages speaks in a distorted dual layered-combo of a high-pitched young voice for the figure of Lindzel, and a deep-elderly voice via Barthandelus being assimilated into him. His second form on the other hand, speaks in a distorted voice more akin to the voice actors' base voice tones.

The lower part of Orphan. 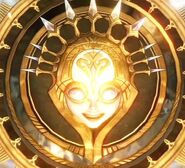 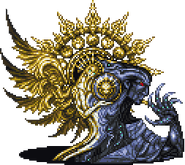 An orphan is a child whose parents are dead or have abandoned them permanently.

In its first form, and second form's decorations, the face of Orphan's angelic half refers to the design of Sol Invictus, the Roman Sun God. Furthermore, the angel's posture and the color scheme of Orphan's first form (and Dysley's attire) reflect the art style and sacred "purple and white" coloring used by the Byzantine Empire.

Orphan transitioning from the shelled form to its true form gives meaning of "an orphan being born from the loss of parents". Orphan's first form represents an image of "parents" alluding to classical Renaissance art depicting the Biblical Madonna and Child. Orphan's final appearance and name allude to the Ophanim, celestial beings described in the book of Ezekiel that guard the throne of God, and are depicted as fiery, eye-covered wheels.[1]