In 2002, for the release of Final Fantasy Origins, the soundtrack was rearranged and released as the album Final Fantasy I & II Original Soundtrack by Uematsu and Tsuyoshi Sekito, who won praise for his involvement and who would become, the following year, the lead guitarist of the Black Mages.

The composer, Nobuo Uematsu, while working on the first Final Fantasy title wasn't aware he was going to be working on a series starting with his first project on Square. Hironobu Sakaguchi had told Uematsu he didn't want to try and compete with Enix and their Dragon Quest series and when Uematsu listened to its music he noticed Mr. Sugiyama's (the Dragon Quest series composer) rigidly classical style. He didn't want to create that type of music, and so didn't approach Final Fantasy with any specific ideas.[1]

The limited hardware of the Nintendo Entertainment System set some restrictions on what kind of music the games could feature. Only three types of sounds were available, and did not offer much room to play around with: they had a low channel, a mid-range for arpeggios, and a top channel for melodies. Alternately, one could use the low end for arpeggios, and then use the other two for melody and its echo in order to give off a somewhat eerie, floating sound.

All Sounds of Final Fantasy I & II[edit | edit source]

All Sounds of Final Fantasy I & II

The original soundtrack of Final Fantasy introduced three of the musical themes that became a staple of the series ever afterward, as well as some lasting fan favorites such as "Matoya's Cave." Uematsu, at the time Final Fantasy was still being produced, was asked to compose the music for the game by the series' creator Hironobu Sakaguchi during a meeting at the small offices where Square Co., Ltd. was then located. After the game's success, Uematsu was asked to compose the music for the next entry in the series, which, despite its name, was not to be a direct sequel of Final Fantasy. Final Fantasy II introduced the fourth of the recurring themes, the "Chocobo Theme".

Final Fantasy I & II Original Soundtrack is missing some Final Fantasy II music that was on the All Sounds of album, notably the airship music, shop music and dungeon music. It also lacks the remixes "Welcome to F.F. World" and "Farewell! F.F. World." However, the music has been revamped for PlayStation sound quality. 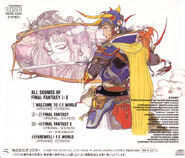 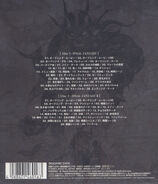 Final Fantasy I & II Original Soundtrack backcover.
Add a photo to this gallery