Final Fantasy IV the first to include a Piano Collections album, a practice that continued in the series afterward. Another arranged album, Final Fantasy IV: Celtic Moon, was released as well, performed by Máire Breatnach in the style of Celtic music.

Uematsu noted that the soundtrack's production was an arduous task, involving much trial and error. The reason stemmed from the then-recent transition phase from the Famicom to the Super Famicom hardware.

I have never before had a job go as smoothly as this one! Of course, I imagine that my workplace in Hawaii had much to do with that, where I could relax and concentrate on my job. The weather was great, and my office building overlooked Waikiki Beach. On the weekends, I went to concerts at Aloha Stadium; I just saw MC Hammer last week, in fact. But anyway, for me, the most delightful part of my stay was that, unlike Tokyo, there were hardly any cars or people.

Waikiki's Main Street, Kalakaua Avenue, has no congestion at all. In such a blessed environment, one idea for a composition came to me after another; I was never at a loss for inspiration! When my job tired me out, I would take a stroll on the beach with a beer in hand. Watching the blazing red sun set at twilight, feeling the cool, refreshing breeze against my cheek... sob, sob, sob... (crying)... splash, splash... (one teardrop, two teardrops)... I'm sorry... That's not true... My job wasn't anything like that... I just escaped into my dream world for a little while by just telling all you FF fans about it, and that made it seem real to me, so... Well, anyhow, it's been about six years since I got this game music job, hasn't it... And I've had many things happen to me in that time, many hardships - I've had compositions that I fought long and hard to create end up scrapped, been stuck for ideas just before deadline, has game magazines disparage my music, and had my bike break down. And then there was the time I went to the vending machine to buy a cola and ended up pressing the button for oolong tea by mistake... Aaah, but it doesn't matter... anyhow, it's been horrible up to now, my friends! And this job was even tougher! Since I was working with new hardware in the Super Famicom, the music was from start to finish a series of trials and errors, and the staff practically lived at the company, staying over in sleeping bags and doing nothing but working - I myself haven't had a full day off since February of last year! Do you believe it? We worked every day, through regular days off, summer vacation - all of them, everyone.

This was hardly our job; this was more like what Japanese salarymen do. And my staff on this project was constantly whining - "I'm too busy!" "I already did my best on the music!" "That guy's watching what I'm doing!" Now, they shouldn't say things like that - they should just enjoy themselves.

Yeah, those people are soft. When the pressure mounts, they buckle. You have to take care of yourself -

"By the way, boss, did you think my idea about working in Hawaii was good?"

"Well, you going to Hawaii could mean the difference between you writing good compositions and bad ones."

"The waves are violent in Hawaii."

...and we all lived happily ever after.

August 21, 2001
Final Fantasy IV Official Soundtrack: Music from Final Fantasy Chronicles is the North American release of the Final Fantasy IV: Original Sound Version album. It is almost the same as the original, except some titles were changed and a bonus track was added taken from the Piano Collections album.

January 30, 2008
Final Fantasy IV: Original Soundtrack is the complete soundtrack for the Nintendo DS version of Final Fantasy IV. All songs have been rearranged for the DS hardware by Junya Nakano or Kenichiro Fukui. Along with the new arrangements, the album features a vocal version of the "Theme of Love" called "Moonlight" (月の明り, Tsuki no Akari?) sung by Megumi Ida. The bonus DVD features the full FMV opening as well as a promotional trailer and an interview with composers and sound designers whose work is featured in the game.

Two versions of this soundtrack exist that both have the same catalog number: the "first pressing" edition, and the regular edition. The first pressing has a slipcase cover that features Cecil in both his dark knight and paladin appearances. The CD and DVD are exactly the same in both versions. 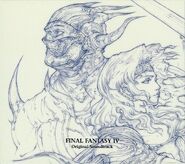 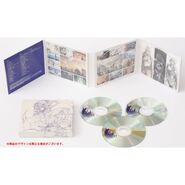 First pressing of the album. 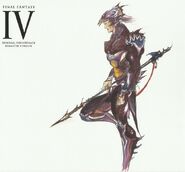 October 17, 2018
Final Fantasy IV Original Soundtrack Revival Disc is the complete soundtrack for the SNES version Final Fantasy IV on a blu-ray disc with high-quality audio. It includes the ability to view game visuals with the music. MP3 files are also included on the disc for portable music devices.