Final Fantasy VI was a sort of ending point for me. Not just the music, but the whole game. I thought, if I do this work for the rest of my life, how many more games will I be able to do? With the satisfaction and excitement I felt after finishing that project, I thought I had reached my primary goal, and could quit doing game music with no regrets.

The last of the soundtracks to be issued for the 16-bit generation of consoles, the album is the longest recorded for said generation of Final Fantasy games. For Nobuo Uematsu, the music of Final Fantasy VI marked the end of a stage in his career, which was well-grounded by then in the video game music industry.

The music was subsequently included in two arranged compilation albums: Final Fantasy VI: Grand Finale and its respective Piano Collections album. The Original Soundtrack of Final Fantasy VI has received raving reviews, being hailed more than once as one of the best video game soundtracks. The game features numerous fan favorites such as "Terra's Theme" and the "Aria di Mezzo Carattere".

When Uematsu started composing for Final Fantasy VI it marked the moment he could start experimenting for the first time. Square had more technological possibilities available, and at the time the team was still quite small, so there was a strong feeling of cooperation and trying to build something ground-breaking.[2]

This list prioritizes the digital English track titles first, with the OSV English titles listed second (when different). Kefka's Domain English titles can be found below.

Final Fantasy VI Original Soundtrack Revival Disc only uses one disc and therefore the track numbers are continuous from 1-61. It has three bonus tracks.

December 01, 1994
Final Fantasy VI: Original Sound Version album was released in North America under the name Kefka's Domain - The complete soundtrack from the Final Fantasy III video game. It was originally available through direct order from Square's Redmond office before they closed down. Kefka's Domain is basically the same as the Japanese release, except that song title translations were taken from the translations used in the Original Sound Version Piano Sheet Music book and based on the English release of Final Fantasy VI (which had been released under the name Final Fantasy III).

March 27, 2019
Final Fantasy VI Original Soundtrack Revival Disc is the complete soundtrack for the SNES version Final Fantasy VI on a blu-ray disc with high-quality audio. It includes the ability to view game visuals with the music. MP3 files are also included on the disc for portable music devices.

This release includes 3 bonus mp3s of songs originally available on Final Fantasy VI Special Tracks . They are not included in the Blu-ray tracks with game footage. 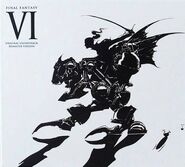