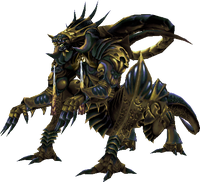 Original is a group of specially bred fiends from Final Fantasy X. Typically more powerful than Area Conquest and Species Conquest fiends, they easily KO a party that has no trouble with the storyline bosses, and as such can be regarded as superbosses. Unlike most superbosses, however, they can be fought as often as the player desires, and offer substantial rewards for unlocking them and for defeating them in battle. To unlock the Original monsters certain requirements need to be fulfilled.

All Original Creation monsters (excluding Neslug) drop equipment that provide a 6% critical hit chance bonus instead of the usual 3% (this is relevant to weapons and armor pieces, but only to attacks that deal physical damage). With the exception of Nemesis, all Original Creations have the Gambler's Spirit item as a common steal, making them an excellent source for farming items for mixes like Trio of 9999 and Hyper Mighty G.

The following rewards are given once each Original monster is available to challenge: