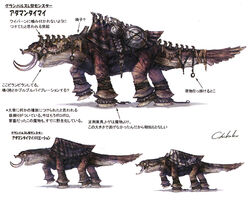 Oretoises are turtle-like animals found on Cocoon and Gran Pulse. They are massive opponents native to the Archylte Steppe. They possess some of the highest HP totals in the game, as well as very high Strength and Magic. This is complemented by their access to powerful abilities, such as Roar, Quake, and, for some variants, Ultima. Fully mature oretoises possess separately targetable legs, allowing the party to temporarily incapacitate these foes by eliminating the legs' HP bars.