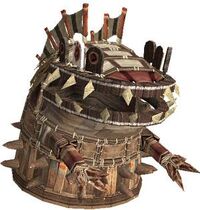 Orchish Warmachines are not well understood. Historic sightings of these machines was always obscured by the caves that they were housed in—leading many to believe that Orcs were behind the warmachines controlling their moves. More recently, however, warmachines have been spotted moving about seeking on their own—suggesting that they are their own bosses. Jagidbod's Warmachine is a great hint that they are in fact vehicles for destruction. During a campaign Jagidbod will emerge from the wreckage of his battle-beaten warmachine to fight in person.

While not known for providing successful adventurers much in the way of rewards, drops of guns and boomerangs have been reported. 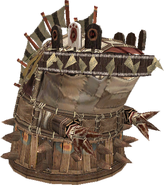 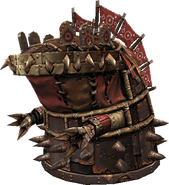