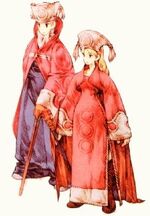 Orator (話術士, Wajutsushi?), also known as Mediator is a recurring job in the series.

Orator (Mediator on the PlayStation), it is a magical-based job and they use speechcraft as their main form of attack, along with guns. The Orator can recruit monsters into their party, but they can also be used to recruit human characters. Despite the Orators' artwork, they cannot equip any rods, staves, or poles.

Orator is one of the available jobs, once the player has a level 10 Juggler and a level 15 Gambler.

[view · edit · purge]An orator, or oratist, is a public speaker.