The Opera House is a location in Final Fantasy VI. It is situated at the end of a long peninsula south of Jidoor, and features the Maria and Draco opera, starring the famous singer Maria. The Opera House is directed by an Impresario.

While seeking a lead in Jidoor to get to the southern continent and infiltrate the Empire, the party meets the Impresario and he mistakes Celes as Maria before rushing off. The party learns that Setzer, the owner of the world's only airship, intends to abduct Maria and make her his bride. The party decides that Setzer's airship is the transportation they need and head to the Opera House to meet with the Impresario.

Locke convinces the Impresario to set a trap for Setzer by having Celes impersonate Maria and perform the opera. When Setzer abducts her, Celes can sneak the party aboard the airship. While Celes and the Impresario are initially hesitant, they eventually agree. Ultros overhears the plan, and plots to drop a weight onto the stage in the middle of the production, ruining the show and their attempt to sneak aboard the airship.

During the show, Locke goes and helps Celes get ready for Maria's major singing role, and watches her from the wings. As he leaves he finds a letter from Ultros taunting him about his plan, and Locke rushes to show the Impresario. As the opera's climax unfolds and the two male leads duel for Maria's hand, Locke and the party rush up into the rafters to stop Ultros. In their confrontation they fall off and land on the stage, incapacitating the leads. Locke attempts to play it off as part of the show, and the party battles Ultros. As he flees, however, Setzer descends and grabs Celes, taking her to the Blackjack.

A year later in the World of Ruin, the Earth Dragon, one of the eight legendary dragons, has taken up residence on the stage. By pulling one of four switches in the right wing, the party can drop onto the stage and battle the dragon. After defeating the dragon, the Impresario thanks them once more.

Gameplay of Celes during the opera scene in the Pixel Remaster release.

After arriving at the Opera House after meeting the Impresario in Jidoor, a cutscene will play of the party making their plan to trap Setzer, and the first act of the opera begins. When the player receives control of Locke, exit the auditorium and go to the dressing room and speak to Celes. After a dialogue between them, the player is in control of Celes.

The book on the table contains a transcript of Celes' upcoming song, which the player can read to memorize her prompts. When Celes walks onto the stage, three prompts will appear for her song, and the player must select the correct prompt within an unseen time limit to continue the show properly. When Celes climbs to the next floor of the set, Draco will enter, speak to him and follow his movements as close as possible while he moves. When he vanishes and leaves a bouquet, take it and go to the end of the balcony above to end the scene.

Back in control of Locke, inspect the letter in Celes' room and then go speak to the Impresario. Once the time starts, go to the upper-right room and press the far-right switch separate from the other three. This unlocks access to the rafters in the upper-left corner of the auditorium. In the rafters the rats serve only to stall, try to wait for them to move out of the way and then quickly run past them. If a battle is provoked, focus on defeating the Goetias, as they call more Stunners when they are all KO'd. Speak to Ultros at the end of the rafters to proceed to a boss battle with him.

In the World of Ruin, the Earth Dragon has taken up residence on the stage. Pulling the second switch from the right in the switch room will drop the party onto the stage and initiate a battle with the dragon. The Earth Dragon can be fought at any point the party can reach the Opera House.

"Spinach Rag" is the background theme that plays at the Opera House.

The party heads to the Opera House in order to make contact with Setzer, who owns an airship that can get them across the sea to the Empire.

The Opera House appears as a map in Dragon Quest & Final Fantasy in Itadaki Street Portable.

Early in development, it would have been Biggs and Wedge who disrupted the opera instead of Ultros. The party would have fought the two in the rafters in a timed battle where the two tried to push the weight off the edge of the screen and the party had to defeat them before they succeeded.[1]

It is possible to bring Shadow to the Opera House, by skipping hiring him in Kohlingen until the player has returned from Zozo. However, he will leave during the first act and be unavailable for the Ultros sequence and the entirety of the southern continent, so this is not advised. If the player does this, the Impresario has a line where he mentions Shadow leaving.

When Setzer crashes the opera and abducts Celes, it is possible to notice she briefly turns into a seemingly garbled mess of pixels before taking on the appearance of when she was chained up in South Figaro. This occurs because Celes' chained up sprite is actually a separate sprite from her normal sprite sheet, and the game quickly overwrites Celes' sprite with the sprite of her chained up. At the moment the two sprites are swapped, Celes is facing down, a sprite position that is retained by her chained-up sprite, but it is a single-frame sprite with no animations. The game thus loads data from the next sprite sheets in order - two static sprites of Gau when the party dresses him up to meet his father, and then a single sprite of the King of Doma Castle collapsed. When the two sprites are swapped the game loads a mixed-up combination of the King of Doma's sprite and Gau's sprite, before the sprite is made to face the proper position and reverts to Celes chained up. What system the player is playing the game on affects how easy it is to notice this glitch, likely because the different processing power of the different systems allows the sprites to be loaded and repositioned at different speeds.

The Opera House has some more content that was not completed. Locke had a few additional lines, and three unused key items seemingly intended for some purpose in the sequence. 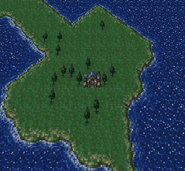 Opera House on the World of Balance map (SNES). 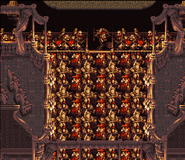 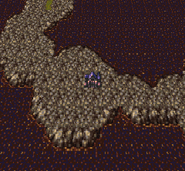 The Opera House on the World of Ruin map (SNES).

Inside the Opera House (GBA).

The Opera House in the World of Balance (iOS/Android/PC).

The Opera House on the World of Ruin map (2014 mobile/Steam).

Entrance to the Opera House (iOS/Android/PC).

Ultros shows up to ruin the opera (2014 mobile/Steam).