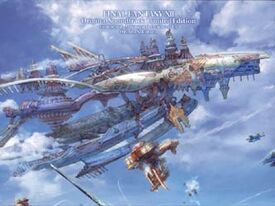 "The Royal City of Rabanastre"

It is named "Opening Movie" because it plays during the cinematic prologue. The track begins in a celebratory mood as it accompanies the wedding parade and ceremony between Ashelia B'nargin Dalmasca and Rasler Heios Nabradia. At 1:47, the track descends into heavy ambient as it accompanies the battle strategy meeting between Lord Rasler, King Raminas B'nargin Dalmasca and Basch fon Ronsenburg, and Dalmasca's march into the Battle of Nalbina Fortress.

As it reaches point 3:33, the movie cinematic shows the battle taking place at the Fortress between Dalmasca and the invading Archadian Empire. At 6:00, the track plays solemnly as it mourns the death of those who fall in battle, and Archadian Imperial Fleets approach towards the Royal City of Rabanastre.

Leitmotifs from "Theme of Final Fantasy XII" are prominently used in other tracks. This leitmotif is associated with the Kingdom of Dalmasca's resistance against the Archadian Empire, and reoccurs in other themes whenever it involves the struggle of Princess Ashe.

Tracks that include the leitmotif are "The Royal City of Rabanastre", "Coexistence (Liberation Army Version)", "The Mosphoran Highwaste", "Nap", and "Ending Movie". It also features prominently in battle themes such as "Boss Battle", "Desperate Fight", "Clash of Swords", and the final boss theme, "Struggle for Freedom". The theme is also prominent in "The Zodiac Age," a new theme featured in the credits selectable from the menu of the HD remaster Final Fantasy XII The Zodiac Age.

"Opening Movie (Theme of FINAL FANTASY XII) ~ The Dream to be a Sky Pirate" appears on the Piano Collections album to Final Fantasy XII.