Onrac, also known as Onlak in the PlayStation port, is a town from the original Final Fantasy. It is located on the northwestern island of the archipelago where the game takes place. The Sunken Shrine is found underwater, near the shore.

The Warriors of Light head to Onrac to find a way to enter the Sunken Shrine and defeat the Kraken, but after finding a submersible barrel, they are stopped by a woman at Onrac's dock. She hints that they must first obtain the Oxyale to travel underwater. When the Oxyale is brought to her, she reveals herself as the spirit of a Mermaid. Before she passes on and grants access to the "Submarine", she asks the Warriors of Light to defeat the Kraken and free her living brethren from his wrath. An elderly man waiting near Onrac's dock reveals Onrac had flourished as a kingdom two hundred years ago.[note 1]

Different enemies appear in the forests surrounding Onrac and the desert to its west.

The Background Music that plays in Onrac is Final Fantasy's "Town" Theme.

Onrac appears as ruins on the world map, at the Land of Discord. In the Confessions of the Creator scenario, a Teleport Stone can be found near it, and it is the nearest to Feral Chaos's seal.

Onrac features heavily in the game's backstory given in the Reports. At a time of war with other nations, Onrac sought to create a weapon to combat the weapons of their enemies, specifically summoned monsters and Omega. Samples of crystal ore retrieved from a world beyond a portal to the Interdimensional Rift were experimented on, leading to the first manikins, but they are deemed unfit for military use. When the portal to the Rift closed, research stalled, and Onrac hired a researcher from Lufenia named Cid to assist them.

Cid used Lufenian memory rituals to infuse a manikin with memories and give it sentience, creating Chaos. Onrac used Chaos to destroy the summoned monsters and Omega, and when Cid and his wife refused to assist them, Onrac imprisoned them and used a clone of Cid's wife, named Cosmos, to pacify Chaos. Eventually Chaos, Cosmos, and Cid were pulled into the Rift, and Onrac lost their weapon of war.

Onrac is a recurring joke in the webcomic 8-Bit Theater (which is loosely based on Final Fantasy), where it is described as "a hole" or similar and is destroyed or greatly damaged several times. 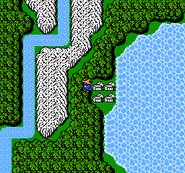 Onrac on the World Map (NES). 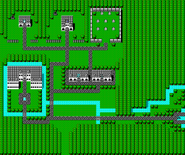 Onrac on the World Map (PS).

Onrac on the World Map (GBA).

The ruins of Onrac in World B in Dissidia 012 Final Fantasy.