The four nameless main characters of the original Nintendo Entertainment System version of Final Fantasy III and the Onion Knight (オニオンナイト, Onion Naito?) of the Dissidia and Theatrhythm games based on them are the only notable Onion Knights.

The Onion Knight is a doll and Lulu's Celestial Weapon. The original Onion Knight sprite is on the doll's shield. Upgrading Onion Knight to second tier allows Shiva to surpass her damage limit, while attaining the weapon's maximum power allows Lulu to also deal up to 99,999 points of damage with a single attack.

Trading card of Onion Knight in Ex-Mode as a Sage.

In Bravely Default, Onion Shirt is an outfit for Tiz Arrior that can be purchased from the Adventurer for 200,000 pg after upgrading the armor shop in Norende to its maximum level. Equipping it will make Tiz appear clad as an Onion Knight regardless of what class he is currently in, though it has no effect on his stats. He will also don the outfit during cutscenes.

In Bravely Second: End Layer, Onion Knight Garb returns as an outfit for Yew Geneolgia. It can be bought for 990,000 pg in Chapter 3, or could be obtained for free by pre-ordering the game in certain regions. As in Bravely Default, Yew takes on the appearance of a Red Onion Knight in battle, on the field, and during cutscenes. It overrides whatever job's costume he is currently in. 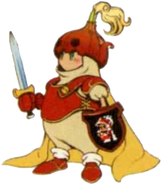 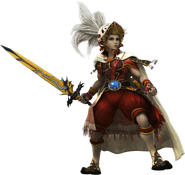 CG Render of Onion Knight from the Dissidia series.

Onion Knight's Helm appears as an adornment in Lightning Returns: Final Fantasy XIII as allusion to the job.