Cid Pollendina: Oh, shut up and help me remodel the Onion Knight (Opera Omnia) page!
Please expand this article into a full one. The following tasks need to be completed:This request can be discussed on the associated discussion page. Remove this notice upon completion. 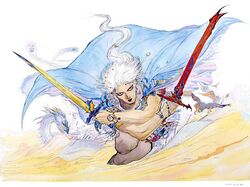 The alternate costume, Bladewielder, is based on the "Unnamed Warrior" artwork made by Amano.

Summoned into the conflict by Materia, Mog recruits this youth but sage knight at the Snowy Peaks of Crudelis. When the party meets the him, he declines their request to join in favor of pursuing his own observations, having been in the world for a short time already. Nevertheless, he trails the party and admits to being worried for them after they battle some of the monsters in the area.

The Onion Knight joins the party after another battle, admitting that he probably wouldn't be able to survive the monster infestations on his own. He is still skeptical of the "will of the light" idea, and is unsure if he'll still be allowed to join by saying so. Although the others give their reasons as protecting their worlds from torsions or battling longstanding enemies, the Onion Knight's motive is to discover the reason they're there and the truth behind the events. Zidane assures that they're not all heroes fighting for justice; everyone there has their own reasons to fight.

Later, the Onion Knight asks Terra about her motives because Mog's answers seem "rehearsed", and the party is still blindly following his instructions. Terra explains that she's fighting mainly to stop Kefka, assuring the Onion Knight that she and the others have decided on their own to do this.

Lost Chapter: The Power of Valor[]

After Cater joins the warriors' ranks they search a nearby forest for a torsion and face off against numerous enemies. Yuffie complains about her exhaustion during a lull in combat even as Cloud presses them to continue to their destination. As they begin to leave, Yuffie realizes that she dropped one of her materia. She decides not to risk further danger to her tired comrades by dragging them through unnecessary combat. Cater suggests that she and Yuffie sneak past the enemy waves to peek at where she might have dropped the materia.

They search in vain at a site of a previous battle when the Onion Knight approaches them, telling them to return before the risk becomes too great. He asks why Cater insisted on finding something that Yuffie had already given up on. Cater reminds him that Yuffie is a friend in need. The Onion Knight presents Yuffie with the materia, which she had dropped where she had been standing earlier. She excitedly regroups with the others.

The Onion Knight accompanies Zack and Cloud where they discover a large number of Sephiroth's clone-like dark manikins congregating in a large cave. The Onion Knight thinks about when Vivi's dark manikin was rendered a life-like replacement at Kuja's false Iifa Tree but does not understand for why Zack's dark manikin was chosen in particular for this task. He is frustrated when Cloud and Zack mull over the topic as neither actually remembers enough to piece the story together. He summons Mog to ask him if he knows anything, but Mog admits that all he understands well is brilliance rather than the bodies of the manikins which might conceal them. Mog does convey that the only dark manikin of Zack with brilliance was the first they had met. Mog later clarifies that because dark manikins are created not by the gods, but by the crystal core of darkness, it is possible that they are not bound by the gods' laws. The Onion Knight finishes Firion's thought as he reasons that if someone controls the crystal core of darkness, then they have unlimited power to manipulate, or destroy, the world as they wish.