The way of the onion knights is a long and hard one... but once you master the job, the rewards just might be worth it!

The bearer of this certificate has learned how to unlock the latent power within all of us and is deemed worthy of the title of Master Onion Knight.

The four Onion Knights of the NES version are not named in-game. The official manga serialization, Legend of the Eternal Wind: Final Fantasy III, names them Muuchi (ムウチ?), Doug (ダグ?), J. Bowie (J・ボウイ?), and Melfi (メルフィ?, the only female in the group). In the Dissidia Final Fantasy Ultimania guide, and on the series's 25th anniversary website, they were given the same names as the protagonists in the 3D remake: Luneth, Arc, Refia, and Ingus.

In the 3D versions the four protagonists have unique colors in many of their job outfits, each matching those of the four Onion Knights' field sprites from the NES version. In the default party order the colors are reversed from that of the NES version, with Luneth wearing purple, Arc wearing green etc.

In the NES release, Onion Knight is the default job.

In the Nintendo DS remake, the player must send a Mognet letter to seven other people playing Final Fantasy III. Afterward, the player must receive four more letters to Topapa, and the fourth letter will say that some children are in danger. The player must head to Ur and talk to Topapa, then head to Altar Cave and rescue the children from the Bombs. Afterwards, they will be given the Onion Knight job. Direct online connectivity supported by the Nintendo Wi-Fi Connection service was decommissioned in late May 2014. Thus, the Mognet messaging service in Final Fantasy III is limited to direct local communication only.

In the following releases of the remake, as there is no way to communicate with other players, the quest is unlocked once the player has completed 25% of their bestiary (usually after beating Gutsco). A message from Topapa through Mognet will say that the children went missing. Arc or Luneth must be in the first character slot for the message to appear. After talking to Topapa directly, he will tell that the children could be at Altar Cave. After saving the children from three Bombs, one of them will give a crystal fragment to Arc, unlocking the Onion Knight job.

The Onion Knight has no special command since it is the default job class and the weakest during the beginning. Once the character reaches level 90, the Onion Knight's stats expand rapidly, reaching 99 in every stat, making it the most powerful class. It is also the only class that can use the onion equipment, the strongest equipment set.

The levels below refer to character levels, and not the levels of the jobs themselves.

In the original NES release, the Onion Knight can only equip three sets of equipment; the most basic equipment, some late-game equipment, and the ultimate onion equipment.

In the 3D versions, the Onion Knight can equip anything, except for the job-corresponding ultimate weapons. It is again the only job able to equip the Onion equipment. 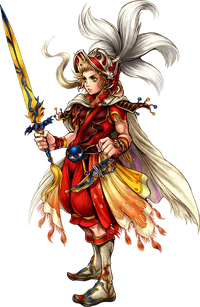 Beginning with the Dissidia series, a young boy bearing the title of Onion Knight has since appeared in other games as the hero representing Final Fantasy III. Like the Warrior of Light, his personality and backstory are entirely original, and is considered a separate character from the Onion Knight job class and the protagonists of the Nintendo DS remake.

Though he is the youngest of the heroes, he hates being treated like a child and thinks like an adult, though at times is doubtful of what he can do.

In the original Dissidia Final Fantasy Onion Knight is a warrior of Cosmos, opposing the Cloud of Darkness. In the beginning of the story, he travels with Terra Branford and aids her until she is able to fight and control her powers and eventually obtain their Crystals.

The Onion Knight returns in the prequel Dissidia 012 Final Fantasy, wherein flashbacks is annoyed and constantly smothered by fellow warrior Vaan, who treats him like a younger brother.

He returns in Dissidia Final Fantasy NT, now as a warrior of Materia. After being tasked to combat the warriors of Spiritus, Onion Knight welcomes new warrior Y'shtola and offers to guide her through the world, and reluctantly allows Vaan to tag along.

The Onion Knight is associated with speed and agility outside of the Dissidia series, having also appeared in Dissidia Final Fantasy Opera Omnia and Theatrhythm series, among others.

Final Fantasy Artniks (4).
Add a photo to this gallery

The Onion Knight appears as a recruitable character, drawing on design elements of its Dissidia incarnation and representing the Final Fantasy III realm.

Trading card (Ninja).
Add a photo to this gallery

The Onion Knight appears as a summonable vision, released during the event Castle Hein, drawing on design elements of its Dissidia incarnation and representing Final Fantasy III. Additionally, Refia has an Onion Knight variant (たまねぎ剣士レフィア, Tamanegi Kenshi Refia?). Both Onion Knight and Refia are 5-7★ Rare Summons and their role is primarily that of Physical Damage; however, their skillsets, stats and Trust Master rewards differ.

A costume of the Onion Knight in his Dissidia Final Fantasy attire appears in Kingdom Hearts Mobile.

Artwork of Luneth as an Onion Knight.

Artwork of Arc as an Onion Knight.

Artwork of Refia as an Onion Knight.

Artwork of Ingus as an Onion Knight.

In-game render of the Onion Knight in Dissidia Final Fantasy.

CG render of the Onion Knight in Dissidia Final Fantasy.