Cid Pollendina: Oh, shut up and help me remodel the Onion Knight (Dissidia)/Opera Omnia page!
Please expand this article into a full one. The following tasks need to be completed:This request can be discussed on the associated discussion page. Remove this notice upon completion.
Template:Infobox character Dissidia 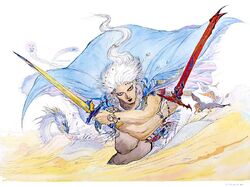