The first alternate costume, called "Bladewielder", is based on another of Yoshitaka Amano's "Unnamed Warrior" art, featured in Final Fantasy III. He retains his silver hair from the "Slasher" costume, but now dons a thigh-length light blue armor and cape with a white sash underneath. The first alternate coloration recolors his armor, cape, and boots a primarily black color with gray accents, and resembles his "Slasher" attire from Dissidia 012. The second alternate coloration recolors his armor jet black, his cape yellow, and his boots dark yellow.

Bladewielder C.
Add a photo to this gallery

I finally got it. I was a fool to defy my heart, just to bind myself to reason. I will protect Terra with my own strength. That's what's most important to me! Don't get me wrong—I still won't fight against anyone I can't beat. But I've decided in my heart to fight. That's why I'm going to beat you!

The Onion Knight is intelligent and analytical, usually finding solutions to problems through logic. He thinks more like an adult and dislikes those who treat him like a child. He is strong-willed, yet unsure of himself, usually using his head to get out of situations regarding him.

Onion Knight equips swords by default, ninja swords as the Ninja, and staves and the Sage. His staff and ninja swords are wielded by him during EX Skill. Excluding his default staff and blades, all of Onion Knight's weapons can be wielded and equipped in all versions of Final Fantasy III, exclusively for different job classes. 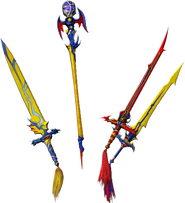 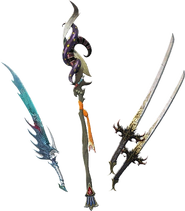 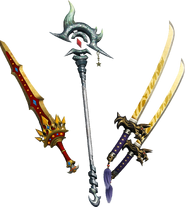 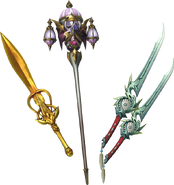 Onion Knight's Golden Sword, Omnirod, and Kiku-Ichimonji.
Add a photo to this gallery

Onion Knight finds himself summoned back to World B, and reunites with everyone in Materia's domain. Confused as to why they have returned, he learns that their purpose is to fight one another so that battle energy can be harnessed to sustain the world's lifeforce. Their briefing is interrupted by Spiritus, and Materia orders them to instead fight against his warriors.

The Onion Knight decides to officially welcome Y'shtola to the battle and offers to be her guide, but is annoyed when Vaan offers to tag along. Before they can move on, a portal appears before them, and the Onion Knight and Vaan chase after Y'shtola who steps through out of curiosity. They find themselves in Midgar, a place that none of them recognize, but speculate that their presence and the memories they carry from their home worlds allows this realm to take on their form. They press forward through another portal, and find themselves in Rabanastre, illusion of Vaan's home.

The three encounter Kefka, who is destroying the city out of boredom. Onion Knight introduces him to Y'shtola as a villain he crossed paths with in the previous war, and the three fight him and his manikin companions. This triggers the planesgorgers to descend upon the realm and consume it, prompting the group to flee. They meet up with Terra, Squall, Zidane, and Lightning, and inform them of the planesgorgers' presence. After learning about the resident Eidolons the two groups return to Materia.

The Onion Knight takes part in the final clash to awaken Shinryu with the other champions, the dragon god responsible for the planesgorgers. He faces off against Exdeath with Zidane. The two are caught in one of the Emperor's traps but are rescued by Firion. Once Shinryu appears, the Onion Knight assists in slaying him once and for all. With the dragon finally defeated, the Onion Knight and the other warriors each return to their own worlds, leaving behind their essences in the form of crystals for the gods to use in their stead.

Type: Specialist - Lands physical attacks to change into the lightning-fast ninja, or magical ones to switch to the sage and assault foes from afar.
EX Skill: Job Change - Switches to either ninja or sage at random. If already playing as either job, Onion Knight's HP and Bravery will be restored as well.

Onion Knight from the arcade tutorial.

Onion Knight with Y'shtola and the Warrior of Light. 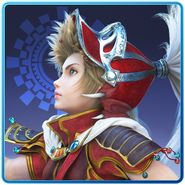 Onion Knight alongside other 14 main characters.
Add a photo to this gallery