The Onion Knight wears primarily bright red armor with some yellow and orange details, a white cape, and an orange skirt. His helmet has an upturned rim over his forehead and a silver-white crest, and a large white plume segmented into five parts.

I finally got it. I was a fool to defy my heart, just to bind myself to reason. I will protect Terra with my own strength. That's what's most important to me! Don't get me wrong—I still won't fight against anyone I can't beat. But I've decided in my heart to fight. That's why I'm going to beat you!

The Onion Knight appears to be very intelligent and analytical, usually finding solutions to his problems through logic. He is strong-willed and detests being treated like a child, insisting he is just as strong and heroic as an adult. However, he is secretly afraid of his enemies and prefers not to directly fight them, instead attempting to talk his way out of a fight or finding a way to rationalize backing down. However, when his friends are in danger he will put aside his fears and stand up to anyone to defend them, no matter the threat they pose.

The Onion Knight's first appearance, he is the representative of Final Fantasy III among the warriors of Cosmos, opposing the Cloud of Darkness.

The Onion Knight returns as a playable character on the side of Cosmos.

The Onion Knight as a playable character now fights for Materia in the war against Spiritus.

One of four orphans raised by the village elder of Ur, the village of wind. While exploring a new cave nearby this small village, they are directed by the Crystal of Wind and selected to be warriors for the Light. With hope alive in their breasts, these young souls shall set out from all that is familiar to them in order to fulfill their mission and save the world from its peril.

Onion Knight is one of 13 default playable characters.

The Onion Knight has a balanced array of abilities to compliment his already high agility, and can be an effective mage along with boosting his strength and luck. However, he is primarily agility based, as the rest of his stats are still low compared to other characters, even when boosted. His abilities are also outclassed by other speed-based characters.

This young knight's diminutive body holds a great deal of wisdom and bravery, earning him the title of Onion Knight despite his tender age. Though he shows the inexperience of youth, he holds tremendous potential yet...

Onion Knight is a default playable character. If the player did not select him among their party of four, he can later be unlocked by collecting Yellow Shards.

Onion Knight a balance in speed and magic, and gains a few stamina based abilities for field stages. He is outclassed by other characters with similar characteristics who have better abilities. Should the player use him, exercise caution as his agility is the Onion Knight's only saving grace.

Onion Knight is one of 28 default playable characters.

His Limit, Ninjutsu, deals damage to boss-type enemies in direct proportion to Strength and Agility. 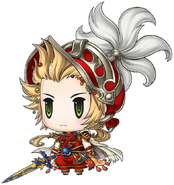 The Onion Knight appears an ally and a summonable Legend in Final Fantasy Airborne Brigade. When joining as an ally in battle, the Onion Knight's special ability is Swordshower. In addition, he is featured on certain ability cards based on his attacks seen in both Dissidia games. 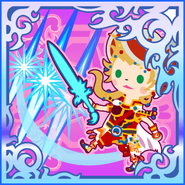 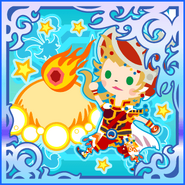 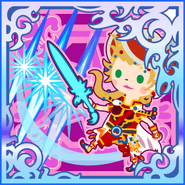 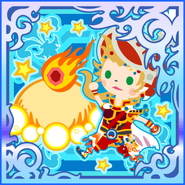 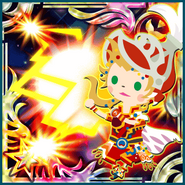 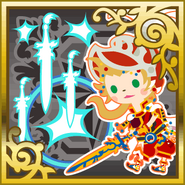 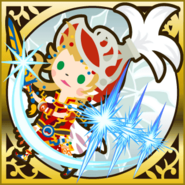 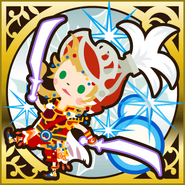 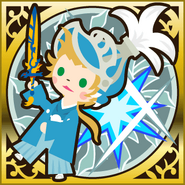 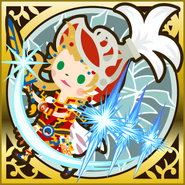 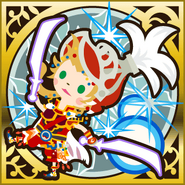 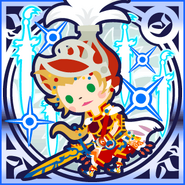 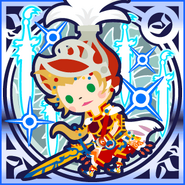 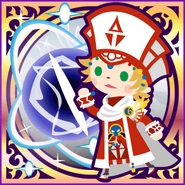 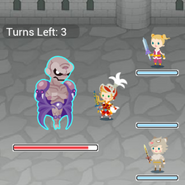 The Onion Knight in battle as an ally. 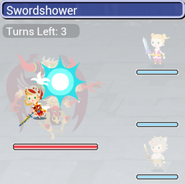 Chosen by the Wind Crystal to become a Warrior of Light when he wandered into the Altar Cave, whereupon he set out from his village on a quest to save the world. Though the Onion Knight's abilities were meager at the outset, he finally gained the power to stand against the source of the world's unrest itself.

The Onion Knight is a playable character who could first be recruited during the Challenge Event Aspiring Knight, wherein he was a First Time Reward for completing the event's Eureka - 7th Level East stage in the Classic Dungeons. He later appeared in Destroyer of Light and Dark.

At first glance, the Onion Knight shares much in common with the game's Core characters, including poor stats across the board, a fact compounded for the worse by an extremely slow progression through the basic leveling system. Worse still, he will be more reliant than most on permanent augments and Record Spheres for his potential power. Thus, until his Easter egg is tripped at level 92, he has little more than nostalgia to make a case for his recruitment. Upon reaching this level, his stats shoot skyward to rival his peers, which also pays homage to the job as it appears in the 2006 remake of Final Fantasy III. His signature abilities are based on his Dissidia Final Fantasy appearances.

His default Soul Break is Turbo-Hit, which for one Soul Gauge segment deals three physical attacks to one target.

The sword Onion Sword (III) carries the Super Soul Break Onion Slice, which for one Soul Gauge segment deals between eight and eleven physical attacks to one target, also lowering both Defense and Resistance by a large amount.

The bracer Onion Gauntlets (III) carries the Burst Soul Break Vessel of Fate, which for one Soul Gauge segment raises the Attack and Magic of all units in the party while granting them Haste, then places the user in Burst Mode. Upon mastery, the Onion Knight adds 5 points to Attack and 5 points to Magic.

The staff Eternal Staff (III) carries the Super Soul Break Blowback, which for one Soul Gauge segment deals five non-elemental magic attacks to all targets and recovers a portion of the party's HP based on each unit's Max HP. Upon mastery, the Onion Knight gains 10 points of Magic. 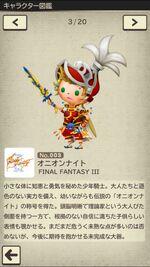 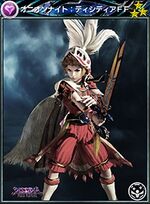 Onion Knight appears as an opponent and on a Triple Triad card in the version available via the Final Fantasy Portal App. On Easy he uses the rule All Open. On Normal he uses Plus and Swap. On Hard he uses Same and Chaos, and the rare five star card of himself and the Final Fantasy III Warriors of Light cards can be won from him, among others. He uses the trading rule One.

Onion Knight will appear as an obtainable character during the Final Fantasy collaboration event.

Onion Knight appears as part of the 2018 Final Fantasy collaboration. 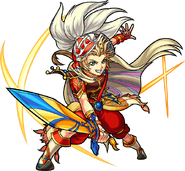 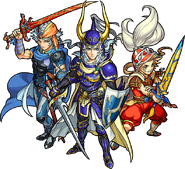 In May 2018 Square Enix releases a silver Onion Knight pendant with a yellow gem as part of the Final Fantasy 30th Anniversary campaign. The reverse side of the pendant simply reads "Final Fantasy" with a carving of a crystal. Onion Knight appears in his Dissidia Final Fantasy appearance, and is released alongside pendants of the other Final Fantasy protagonists.