One MP Cost (ＭＰ消費1, MP Shōhi 1?) is a recurring ability in the series. Though not named until Final Fantasy X, it has been around since Final Fantasy VI. The ability enables the user to use techniques and spells at the mere cost of 1 MP, and is usually obtained late in the game due to its potency.

The ability is never named in-game, but it is the ability of the Celestriad relic (originally called Economizer). This relic makes all magic spells, lores, and summons cost 1 MP.

A simple way to acquire a Celestriad that requires a little patience is to bet a Murakumo at Dragon's Neck Coliseum and fight the battle with Gogo eith three Steal commands, a Safety Bit and a Brigand's Glove. With Gogo stealing from the Galypdes there is a 1/8 chance of stealing a Celestriad. The Murakumo yields a Holy Lance that can be bet to get the Murakumo back, for repeated attempts.

Celestriad can also be acquired as an item drop from the Brachiosaur.

One MP Cost is an ability that can be found very rarely on dropped weapons, and can also be customized by using Three Stars x20. It also appears on Yuna's and Lulu's fully powered Celestial Weapons, the Nirvana and the Onion Knight, respectively.

One MP Cost is only available on the Font of Power Garment Grid after going through all the gates. Font of Power can be acquired in Chapter 5 by completing the Fiend Colony dungeon on Mi'ihen Highroad; access the to colony is granted by dispatching a Lv5 chocobo to Mi'ihen.

When recruited into the party, Elemental species fiends can naturally learn One MP Cost in battle, usually by casting Magic Up on themselves. 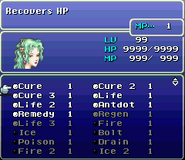 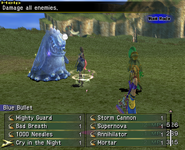 This gallery is incomplete and requires Final Fantasy X added. You can help the Final Fantasy Wiki by uploading images.
Support abilities
Community content is available under CC-BY-SA unless otherwise noted.
Advertisement