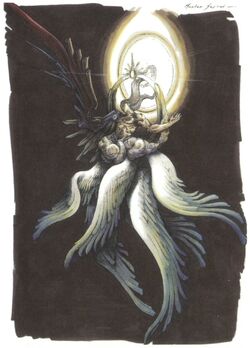 I know that with every concert that we have, when we have the orchestra perform 'One-Winged Angel', for some reason or another that's the one that has the biggest reaction, and everyone sort of expects that to be in a Final Fantasy concert. I still can't figure out why. I know that I pushed everyone to his/her limits, but then it worked out in the end.

"One-Winged Angel" (片翼の天使, Katayoku no Tenshi?) is a musical theme from Final Fantasy VII. It is notable for the final boss theme and for being the first theme in the series to feature vocals. It was composed by Nobuo Uematsu.

"One-Winged Angel" is one of the most popular tracks of the Final Fantasy series. Its name refers to Safer∙Sephiroth, who has six white wings where his legs should be and a grotesque black wing where his right arm should be. Since its original appearance, the title is commonly used to refer to Sephiroth himself, and serves as a motif for the character (Sephiroth's original character theme from Final Fantasy VII is "Those Chosen by the Planet"). With Sephiroth's popularity, "One-Winged Angel" has received several arrangements and had several appearances outside Final Fantasy VII, never far from the presence of the villain it is associated with.

"One-Winged Angel" broke new ground in the Final Fantasy series by being the first song with vocals. The developers experimented with the song and took the recording of it and reduced it in a way it would fit the game; Composer Nobuo Uematsu has mentioned that "One-Winged Angel" is a good example of an experimental song, or a result that they didn't expect from the beginning. Having composed many battle themes for the series before, Uematsu wanted to create something new and unique for "One-Winged Angel".[1]

Nobuo Uematsu apparently got his inspiration for "One-Winged Angel" through Alfred Hitchcock's Psycho theme. Uematsu himself states it so in the Final Fantasy VII: Advent Children special feature, "The Distance: Making of Featurette" on disc two of the Two-Disc Special Edition. Uematsu has also said he had wanted to fuse "musical styles of Russian composer Igor Stravinsky and rock musician Jimi Hendrix" with the song.[2] Specifically, "One-Winged Angel" appears to be based on Stravinsky's "The Rite of Spring" in terms of form and orchestration, using the "augur chord", one of the most famous motifs Stravinsky came up with. Uematsu has also said he wanted to create something that would sound like '60s or '70s rock music performed by a full orchestra, and for the piece to have the same destructive impact as rock music.[1]

It felt too boring to start the piece with an introduction, followed by melody A, melody B, a chorus and an ending, like most songs. I wanted to make something different, structurally. So without any preconceptions about how the song would turn out I wrote down two to four measures of music that popped into my head every day until I got about 20 to 30 different measures. Then I took those different pieces and rearranged them to fit together well. That process of placing these various two-to-four measure pieces of music is how I composed 'One-Winged Angel'.

"One-Winged Angel" is the only composition Uematsu has done with the "puzzle piece" method.[1]

Uematsu had not been trained or been in an orchestra prior to composing "One-Winged Angel", but he wanted to keep the orchestral music atmosphere and be able to "rock it" and have a thick orchestral feel to it. He had samples of stuff he had prepared for the orchestra, but in the end he ended up just giving it over to them and seeing how they could perform it.[3]

"One-Winged Angel" is the theme for the final battle against Safer∙Sephiroth. It was released as the sixteenth track of the original soundtrack's fourth disc.

"One-Winged Angel" was rearranged for the movie, to play during the final battle between Cloud Strife and Sephiroth. This arrangement is titled "Advent: One-Winged Angel", and was meant to be the main focus of the film's soundtrack. Notable from any past iteration of the piece, this new version features an orchestral performance accompanied by The Black Mages, arranged by Shiro Hamaguchi and Kenichiro Fukui, and new lyrics by Director Tetsuya Nomura. This theme was released as the ninth track from the second disc of the Final Fantasy VII: Advent Children Original Soundtrack.

For the movie's extended cut, Advent Children Complete, the song was again redone and titled "Advent: One-Winged Angel - ACC Long Version", and features new orchestration. Since the scene during which the song plays had been lengthened, a new passage was added toward the end. It repeats the song as heard from 1:29–2:15, without the Latin chorus and metal band accompaniment. This new arrangement of "One-Winged Angel" was released as the twelfth track of the Final Fantasy VII: Advent Children Complete Reunion Tracks album.

In the commentary for Advent Children, Nobuo Uematsu says that the previous orchestration never quite felt right to him and, by contrast, the combination of orchestra and metal sounds seemed to be what the piece required all along. Uematsu noted various rock bands that had performed their songs with an orchestra, and failed, and stated that because "One-Winged Angel" was written for neither an orchestra or a rock band, the two styles ended up meshing well for the song's remix.

"Vengeance on the World"

"Vengeance on the World (from FFVII "One-Winged Angel")" is an orchestral arrangement by Kazuhiko Toyama. It plays during a flashback sequence where Sephiroth battles Genesis Rhapsodos, and the Sephiroth boss battle at Nibelheim along with "Controlling the Iron Beast". This new version is half the length of the original version, and features a shorter introduction leading into the vocals much earlier.

This remix focuses on the song's orchestral elements, providing a contrast between it and Genesis's themes, "Flapping Black Wing" and "SOLDIER Battle", which focus on rock elements.

The original Final Fantasy VII version is included in the music player. It is the eighth track of the Memories of FFVII album that is available by default.

"One-Winged Angel -orchestra version- from FINAL FANTASY VII" is an orchestral arrangement from Final Fantasy VII: Reunion Tracks. It appears as one of the two default Final Fantasy VII battle themes. It is the second track of the Dissidia Final Fantasy Original Soundtrack second disc. Although the lyrics are the same as usual, the melody has bars from the Advent Children version.

"One-Winged Angel" can be automatically selected for battles including Sephiroth or Cloud, or taking place at Planet's Core.

The original version of "One-Winged Angel" was selected as the Battle Music Sequence for the Final Fantasy Series play. The game's director, Ichiro Hazama, has noted that "One-Winged Angel" was one of the two main songs the team was told to include when the development on the game was started. The other song was "Clash on the Big Bridge".[5]

"Advent: One Winged Angel" appears in the iOS release as a BMS. It is notably the longest song, with 973 triggers and lasting approximately six minutes.

The theme is included in Theatrhythm Final Fantasy Compilation Album.

"One-Winged Angel" is a playable Battle Music Sequence purchased from the song store for 5 sound medals.

"Advent: One-Winged Angel" plays whenever Sephiroth is summoned via Champion Medal. Once the Medal is obtained, it can also be selected as a normal battle track, under the title "Champion Theme: Sephiroth".

A piano arrangement of the theme by Shiro Hamaguchi and performed by Seiji Honda is included on the Final Fantasy VII iteration of Piano Collections as the eleventh track.

The orchestral version of "One-Winged Angel" from the Final Fantasy VII: Reunion Tracks was included on this album as the eight track.

"One-Winged Angel" is included on the fifth disc of this collector's edition set.

"One-Winged Angel" is included on the fourth disc of this collectors' edition.

"One-Winged Angel" is typically performed as an encore on the Final Fantasy concerts.

"Advent: One-Winged Angel" was included on this concert, preformed by The World Festival Symphony Orchestra conducted by Arnie Rothand The Black Mages, at the Universal Amphitheatre in Los Angeles, California on May 16th, 2005.

"One-Winged Angel" was performed by the Royal Stockholm Philharmonic Orchestra in this live orchestra concert recording.

"One-Winged Angel" is included on this live recording of an orchestral concert, performed by the Kanagawa Philharmonic Orchestra and conducted by Arnie Roth held in Tokyo, in November 2010. Instead of being the encore, "One-Winged Angel" opens the concert.

"Advent: One-Winged Angel" was performed by the Earthbound Papas at the 2012 edition of Vanafest, the Final Fantasy XI Festival.

A live recording of "One-Winged Angel" from at the London premiere of the concert of the same name on February 15, 2014, conducted by Arnie Roth, is included on this album.

"FINAL FANTASY VII Symphony in Three Movements" is a symphony arranged and orchestrated by Jonne Valtonen for the Final Symphony concert series. The first movement of the symphony, titled "Nibelheim Incident", is based on Sephiroth. The 3-note motif of Sephiroth is used throughout the first movement as an element of structural integrity. In the final phase "The One-Winged Angel" emerges before gradually distorting as all of the earlier themes are gradually built on top of each other. This distortion is a reflection of Sephiroth's internal chaos as he becomes aware of his past. In the end of the movement things slow down. As Sephiroth is reborn, the familiar pulse is heard "in almost spiritual context".[6]

"One-Winged Angel" was remixed by Yoko Shimomura twice for the series, playing in superboss battles with Sephiroth in both Kingdom Hearts and Kingdom Hearts II, as well as playing during his fights with Cloud in cutscenes. The remixes of the theme feature shorter intros, leading almost immediately into the Latin vocals, and the vocals as a whole are more prominent than in the original version. The HD ReMIX versions for the PS3 each remix the two versions with enhanced vocals and instrumentation.

The name of the theme refers to Sephiroth's appearance in the final battle, as well as his role in the story.

[view · edit · purge]A one-winged angel specifically refers to a fallen angel. In the non-canonical pseudepigraphical work, the Testament of Solomon, a one-winged demon named Abezethibou is summoned by King Solomon. Abezethibou is shown to have a single red wing, this mutilation symbolizing his fall from heaven, following his betrayal of God to serve the Prince of Hell, Beelzebub.