Omnislash Version 5 (超究武神覇斬ver.5, Chōkyū Bushin Hazan ver.5?, lit. Super Extreme Martial God Supreme Slash Version 5) is a recurring ability in the series. It is the upgraded version of Omnislash, used exclusively by Cloud Strife, and is typically associated with his Final Fantasy VII: Advent Children motif, where it was first used.

Omnislash Version 5 is used to defeat Sephiroth. The attack utilizes the Fusion Swords. The Limit Break involves Cloud separating his sword into its individual components, and attacking the opponent once with each sword. The attack was called "Omnislash Version 5" as it was the fifth version of the attack designed for the film.

In Final Fantasy VII: Advent Children Complete, an extended version of this attack uses thirteen slashes instead of the six. Due to the reasoning for the "Version 5" in the film's original version, the Complete version of the attack is known to fans as "Omnislash Version 6" though it is never stated as such. Earlier in the battle, Cloud also performs his original Omnislash, attacking Sephiroth with multiple sword slashes. However, he was unable to complete its signature final blow, as Sephiroth impales him first.

This ends here! No hard feelings.

Omnislash Version 5 is Cloud's aerial Bravery to HP attack, chaining from Slashing Blow. It slashes the opponent five times, after which Cloud leaps above the enemy to deliver a final strike that knocks the enemy down and away, possibly dealing Wall Rush. Omnislash Version 5 is learned when Cloud masters Slashing Blow, costs 20 CP to equip when masters, 300 AP to master, produces 165 EX Force, and has a power of 21, plus the power of the two hits from Slashing Blow.

Omnislash ver. 5 is an exclusive reactive ability that costs 18 CP to equip. It is activated in Battle Music Sequences (BMS) when a boss-class enemy appears. It deals damage in direct proportion to Strength and Agility. It is learned by Cloud #2 (level 40).

Cloud's card depicting his Advent Children render can use Omnislash Ver. 5 for the discard of a Cloud card. The player chooses one Forward and negates all its abilities, then at the end of the turn that Forward is removed from the game.

While still known as Omnislash in the Japanese versions of the game, Warrior Spirit's animation alludes to the attack's original appearance in Advent Children. The attack has Cloud become enveloped in blue aura as he soars through the battlefield, striking the enemy group several times, and unleashing a finishing downward strike from above. The attack's final strike is heavily inspired by the finale of Omnislash Version 5.

As of version 10.1.0, Cloud has Omnislash Version 5 as his Final Smash if using his Advent Children costumes, the change deals no additional damage, however, the hitbox of the move during its execution is changed. Unlike the trailer and previous iterations, Cloud still has the main sword in hand after the finishing attack, with the other swords reassembling themselves onto it. 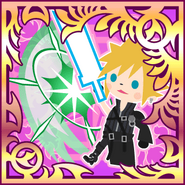 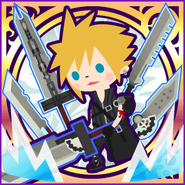 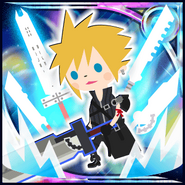 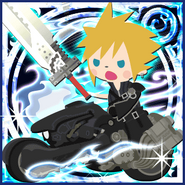 This gallery is incomplete and requires Final Fantasy Trading Card Game added. You can help the Final Fantasy Wiki by uploading images.