Breaking my limits! This is it.

Omnislash is Cloud Strife's Level 4 Limit Break learned from the Omnislash item of the same name. Omnislash is acquired as a reward on the Battle Square, and is available as soon as the player obtains the Tiny Bronco, although it will be cheaper if obtained later with the Highwind. Cloud can learn it once he has learned all of his other Limit Breaks. Omnislash hits random enemies 15 times under the effect of automatic critical hits for 0.75 times normal damage each hit.

Even if the player doesn't learn Omnislash, Cloud will still have it during the final confrontation against Sephiroth. This battle uses a different battle model for Cloud, making Omnislash look slightly different.

Although not named explicitly, the fifteen-slash technique Cloud used to defeat Sephiroth in the Lifestream is described. Zack comments how it was also one of his techniques.

Omnislash is one of Cloud's Limit abilities. Unlike in his other appearances, Omnislash is not Cloud's ultimate move; his Limit Cherry Blossom is even more powerful than Omnislash. Omnislash takes 900 JP to learn and has a range of 3 and speed of 7, but Cloud can only use it if he is equipped with the Materia Blade.

The Japanese name of the attack, (裏超究武神覇斬, Ura Chōkyū Bushin Hazan?, lit. Reverse Super Extreme Martial Spirit Supreme Slash), shares the same name as Zack's Unseen Omnislash that would later appear in Ehrgeiz: God Bless the Ring. This difference is reflected in the attack description on the game's help menu in all languages, with the attack being referred to as "another ultimate limit skill", however this context is lost outside of the original Japanese.

Omnislash is Cloud's EX Burst. The player must rapidly tap

to fill up Cloud's Limit Break meter. Filling the meter in time will have Cloud bombard his opponent with fourteen sword slashes, then finishing up with a final powerful overhead slash that hits six times before applying HP damage. Failing to fill the meter will have Cloud perform up to three swings and an upward finishing slash.

Omnislash is the most powerful EX Burst assuming Cloud has full HP when he executes it. Its hits have a combined power of 68, much lower than most EX Bursts, which have powers of approximately 100, but due to Cloud's EX Mode bonus, the damage of each hit is doubled at full HP, resulting in a total power of 136.

An attack slicing the opponent over and over.

Omnislash is Cloud's EX Burst, with identical properties and power to the original game.

Omnislash is Cloud's exclusive skill, it is learned at Level 40 and costs 18 CP to equip. During Battle Music Sequences, whenever a boss-type enemy enters Omnislash activates automatically to inflict damage based on Cloud's Strength.

Omnislash is an exclusive reactive ability that costs 18 CP to equip. It is activated in Battle Music Sequences (BMS) when a boss-class enemy appears. It deals damage in direct proportion to Strength. It is learned by Cloud (level 40).

Omnislash was performed as the Premium Skill for the Dissidia 012 version of the Cloud memoria. The ability dealt 15 physical attacks to a single enemy, the damage amount was random and based on the enemy's overall health.

Trance Cloud uses his Omnislash as a Crystal Surge ability if it appears in the list. He slashes 14 times before doing the final hit.

Omnislash is SOLDIER 1st Class's Ultimate which targets a single enemy, has Offensive Power of 1100%, Break of 200%, and 3★ Critical. Whereas Cloud's version is Omnislash ∞. In this version, Cloud wields two Buster Swords while executing his Limit Break.

Omnislash is Cloud's Champion summon ability. It inflicts neutral physical damage to one enemy, ignoring defense. It also grants Strength+ to all allies. It is unlocked after completing chapter 17 and costs 2★ gauges to use. When used "Fight On!" from Final Fantasy VII plays.

One of Cloud's cards, depicting his Dissidia artwork, has Omnislash as an ability. Omnislash requires the discard of a Cloud card, four Light CP, and Dulling Cloud, and allows the player to Break a Forward of their choice.

Omnislash is a move for Cloud. It is executed by moving the joystick 360 degrees, pressing high attack + low attack at the same time. The move is notoriously difficult to pull off.

Zack Fair has the move "Unseen Omnislash", which functions exactly the same as Cloud's Omnislash.

Cloud and Sephiroth are able to perform Omnislash when fought in Kingdom Hearts. Cloud's version involves him performing three slashes in total at a fairly slow pace compared to the contemporary portrayals; dealing damage to Sora if hit. Sephiroth's version of Omnislash is reminiscent of the original Final Fantasy VII attack, involving Sephiroth unleashing a flurry of several attacks, followed by a powerful downward strike.

In Chain of Memories and Re:Chain of Memories, stocking three Cloud cards activates the Omnislash Sleight, calling Cloud to soar across the battlefield to attack enemies several times.

Warrior Spirit also appears as Cloud's strongest attack in Kingdom Hearts II when participating as a guest party member and when fought in the Underdrome Coliseum. This version of the attack combines elements of the original attack from Kingdom Hearts and the Omnislash Version 5 attack from Advent Children. The attack has Cloud become enveloped in blue aura as he soars through the battlefield, striking the enemy group several times and unleashing a finishing downward strike from above. The mistranslated name likely derives from the meanings of the (武 (ぶ), Bu?, lit. Martial) (misinterpreted as (む, Mu?, lit. Warrior)), and (神, Shin?, lit. Spirit) kanjis in Omnislash's Japanese name.

Zack also has access to a version of Omnislash when fought in his dark form in Birth by Sleep. This version has Zack teleporting throughout the field attempting to strike the player character with a series of rapid slashes, and performs a final downward strike to unleash an explosion of darkness. While not named in the English releases of the game, the Japanese version of the attack borrows its name from the Final Fantasy Tactics variant of Omnislash (裏超究武神覇斬, Ura Chōkyū Bushin Hazan?, lit. Reverse Super Extreme Martial Spirit Supreme Slash). [1]

In Re:coded, Cloud randomly performs Omnislash in the Coliseum labyrinth both as a boss and a party member. The whole barrage of slashes is sped up and is more akin to the current versions of Omnislash as portrayed, along with the signature finisher.

Omnislash is the Final Smash for Cloud. When activated, Cloud rushes forward, and if he makes contact with an opponent, he will launch it with the Buster Sword, then proceed to slash it numerous times. At the end, Cloud performs an overhead strike that brings both him and the target back to the ground, as well as launching the target. Cloud cannot cancel the move once started, unlike Final Smashes like Marth's Critical Hit, so missing with this attack on the ground on a walk-off stage/in the air without any intervening terrain usually results in a self-destruct.

Cloud's Final Smash Omnislash does not affect and is not affected by his down special Limit Charge in any way.

In Dota 2 by Valve Corporation, a hero unit called Juggernaut has an ultimate ability called "Omnislash". It makes Juggernaut leap near a random target in his vicinity and strike once. Depending on the upgrades obtained, Omnislash grants a minimum of three leaps and a maximum of 17. As in the original Final Fantasy VII: Advent Children (2005), each leap is almost instantaneous and leaves an orange trail. 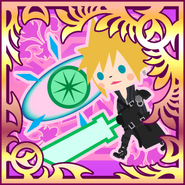 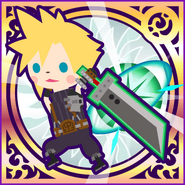 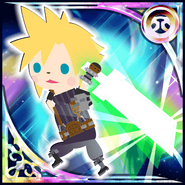 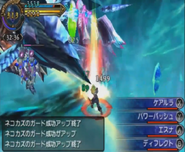 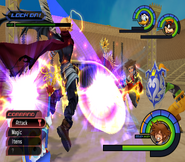 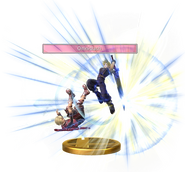 A trophy of Cloud performing the Omnislash in Super Smash Bros..

This gallery is incomplete and requires Theatrhythm Final Fantasy and Unseen Omnislash in Ehrgeiz: God Bless the Ring added. You can help the Final Fantasy Wiki by uploading images. 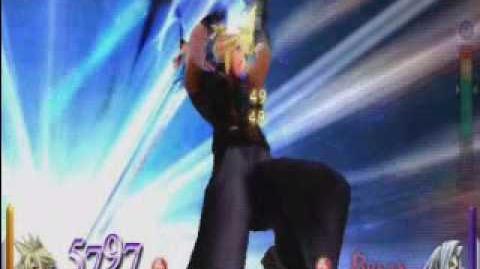