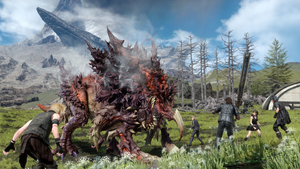 "Omnis Lacrima" (stylized as OMNIS LACRIMA on the album), is the boss theme in Final Fantasy XV. It was composed by Yoko Shimomura and was arranged and orchestrated by Kaoru Wada and Shota Nakama. The original lyrics were written by Tetsuya Nomura.

It plays against large beasts on the field. Although the game has various boss themes, "Omnis Lacrima" was unveiled first and featured prominently in early trailers when the game was still known as Final Fantasy Versus XIII, and it remains the most frequent boss theme in the game.

"Omnis Lacrima" was the second piece from the game's soundtrack to have been released to the public. "Omnis Lacrima" was featured in three trailers: the DKΣ3713 trailer released in 2008, the Square Enix 1st Production Department Premier trailer released in 2011, and the trailer released at E3 2013. The original trailer version has not been included to any official soundtrack, nor does it appear in the game, but it is included on the compilation album memória! The Very Best of Yoko Shimomura. Some of the instrumentals have been changed and it has been looped so it can be used during boss battles.

"OMNIS LACRIMA" is a battle music track as both an arrangement and as the original PS4 version.

"OMNIS LACRIMA (Arrangement)" was arranged by Takeharu Ishimoto and the guitar was performed by Noritsugu Takayanagi. It is the 15th track of disc 2 on the Dissidia Final Fantasy NT Original Soundtrack Vol. 2.

"Omnis Lacrima" has been announced for the game.

"Rulings and Revelations -OMNIS LACRIMA-" is a piano arrangement by Natsumi Kameoka and performed by Yui Morishita (Duke of Pianeet).

"Omnis Lacrima" was performed by the London Philharmonic Orchestra at Abbey Road Studios.

"Omnis Lacrima" is a bonus track on Yoko Shimomura's compilation album, memoria: The Very Best of Yoko Shimomura, which was released in 2014. It was orchestrated by Kaoru Wada and performed by the Masatsugu Shinozaki Group and the Omnis Lacrima Choir. This is the first release of the track.