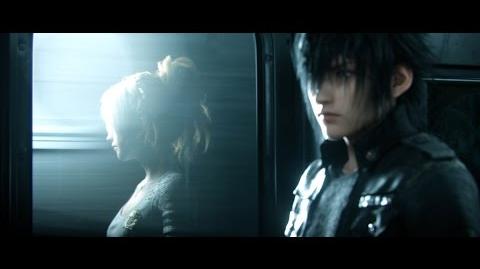 'Omen' is a conceptual CG cinematic trailer by DIGIC Pictures, inspired by Final Fantasy XV. A rapidly shifting world, enemies that appear endlessly, gradual loss of abilities… and a madness that brings harm to the beloved fiancée. This epic production, which can only be described as a nightmare for the struggling Noctis, is a collaboration between Final Fantasy XV and DIGIC Pictures, the world-renowned 3D animation studio that also took part in the creation of Kingsglaive: Final Fantasy XV. This beautiful yet violent vision inspired by the world and story of Final Fantasy XV depicts an 'omen' for Noctis’ father, King Regis, of a catastrophic future that must be avoided.

Square Enix released the short film Omen on 27th October 2016 when Final Fantasy XV was featured on Paris Games Week, to promote the game. It was created by Digic Pictures, the team behind the game's full-length companion movie Kingsglaive: Final Fantasy XV. Parts of Omen are included in Final Fantasy XV if the player downloads the day one patch.

Omen plays out like one long cutscene, stitching together various events, Prince Noctis falling through walls and floors into new scenes. It is a premonition Regis Lucis Caelum, the king of Lucis, has of his son's journey, and an alternate future that he wants to prevent.

The movie progresses like a dream with Noctis feeling his fiancée Lunafreya Nox Fleuret's ghostly presence, and she is his reflection on various reflective surfaces. The voice of young Lunafreya asks a young Noctis to become the Chosen King, and he says "I guess I can do it." Noctis chases after Luna's white dog, Pryna, and crashes his car. He follows Pryna on foot, falling through floors and walls as he goes, eventually ending up in a fiery battle with Niflheim forces. His magic stops working and he steals a firearm from the opposition and topples a tower onto a magitek armor to keep fighting. His shirt is ripped to shreds and he momentarily appears as a fiery-eyed demon that is implied to have killed Luna. The dog he had been following takes a demonic appearance, implied to have been a deception to lead him astray all along.

At the end of the vision King Regis approaches the Crystal and a voice asks him for one more life. The king asks for the gods' forgiveness as he gazes down at Insomnia from the Citadel.

Omen doesn't provide much insight into the game's story, but seeks to capture the feeling the game is aiming for.

The movie has a couple Easter eggs. When Noctis rides a subway full of magitek troopers, there is a poster on the wall of a gold disc and the text "Gone Gold". During the event the short film was shown, the development team also announced that Final Fantasy XV had "gone gold" (meaning the master version which would be printed on discs was done). There is also a job posting on the wall, looking to hire employees for a new Business Division 2 project, the Square Enix development team that made Final Fantasy XV. One of the MTs on the subway is reading a newspaper that has the Assassin's Creed logo on it; Digic Pictures has also worked with that series. In August 2017 it was revealed this Easter egg was an early hint for an upcoming collaboration between Square Enix and Ubisoft for Final Fantasy XV: Assassin's Festival.[1]

A soldier reading a newspaper with Assassin's Creed logo.

Omen inspired some new moves for Noctis for Final Fantasy XV, which are added in the day one patch: warp drop kick (when daggers are equipped), and backward warp magic (elemental magic activation at short range).[2] After the patch, Noctis also dreams of chasing Pryna when he stays at Lestallum.

Some of the royal arms appear: Noctis wields the Sword of the Tall when fighting Niflheim troops in the area with numerous stairs, the Blade of the Mystic when fighting the Behemoth, and he takes the Trident of the Oracle from Lunafreya during their battle. These are equippable weapons in Final Fantasy XV.

The voice who answers King Regis when he talks to the Crystal in Omen is ambiguous. It could be Bahamut (who is associated with the Crystal), or the Lucii (whose souls are harbored in the Ring of the Lucii, which is connected to the Crystal), or even the Stone itself being sentient. The voice says it needs one more life before it can rest. This could refer to the coming of the True King. It is likewise ambiguous as to why Regis asks for the gods' forgiveness after his talk with the Crystal, but it might refer to him choosing to endanger the Crystal by deciding to go forth with the peace treaty Lucis has been offered while keeping Noctis safe.

Lunafreya's death in Omen foreshadows her fate in Final Fantasy XV, although it is not by Noctis's hand. Noctis turning into a demon in Omen might refer to the Starscourge, a malady that turns people into daemons, although Noctis is not affected by it in Final Fantasy XV. Similar to Omen, Final Fantasy XV has a section where Noctis loses the ability to summon weapons.

Pryna, or rather, a demonic dog posing as Pryna to lead Noctis astray, may be an indirect reference to Ardyn Izunia, who also attempts to manipulate Noctis. The dog's manipulations lead to Noctis killing Lunafreya; similarly, Ardyn manages to trick Noctis into throwing Prompto off the Magna Fortia.

After Noctis loses his weapons, he disarms an imperial soldier of its machine gun and appropriates it against the others. In Final Fantasy XV: Episode Prompto, Prompto can perform an Overkill strike on imperial enemies in Vulnerable state to take their weapons, including the Rapidus SMG machine gun.

Many of the locations seen in Omen are locations also witnessed in Final Fantasy XV. Noctis steps into Coernix Station only to find himself in Luna's room in Tenebrae. There is no subway in the game, but Insomnia has a subway system whose remains the party visits in Chapter 14. The area with stairs appears to be the area at Cartanica where the party descends to the Fodina Caestino quarry. The areas where Noctis loses his shirt while fighting magitek troopers resembles the imperial compounds seen in Final Fantasy XV, the Lucian bases and the Zegnautus Keep.

"Share (I Had Dreams)" by Naked Woods plays in the beginning when Noctis heads to a petrol station. The rest of the film is accompanied by "Endlessness" by End of Silence & Really Slow Motion, composed by Andreas Kübler.

Andreas Kübler and Xaver Willebrand who made the track did not know it was for Final Fantasy when they were commissioned to write a song for an epic trailer, but were excited when they learned of it. Thus, the lyrics were not written with Final Fantasy XV in mind, and Square Enix did not use the entire song for the short film, instead adapting it to their needs. The outro wasn't originally part of the song, but the production company requested for an "epic" movie trailer-like finish.

Noctis has Luna's reflection on a window.

Noctis wields the Sword of the Tall.

Noctis and Pryna fall through the floor.

[view · edit · purge]An omen is a phenomenon that is believed to foretell the future, often signifying the advent of change. People in the ancient times believed that omens lie with a divine message from their gods.