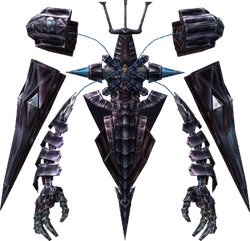 Omega Weiss (オメガヴァイス, Omega Vaisu?) is the final boss of Dirge of Cerberus -Final Fantasy VII-, fought in Chapter 12. It forms when Weiss the Immaculate joins with Omega following his duel with Vincent Valentine in the Deepground headquarters below Midgar.

Professor Hojo, the former head of Shinra's Science Division, was killed by AVALANCHE, but before he died, he uploaded his mind onto the Worldwide Network. The network was fragmented during Meteorfall, locking his data away until the system was reestablished three years later by the World Regenesis Organization (WRO).

The digital Hojo scoured the world for a host body strong enough to fuse with Omega. His quest led him to Weiss, the leader of Deepground. Hojo planned to use Deepground and its military resources to procure the materials necessary to summon Omega and join with it to gain ultimate power.

Using Weiss as his host, Hojo summons Omega, but in the final stage of his plan he is defeated by Vincent Valentine. Nero the Sable rouses his brother after Hojo's defeat, permeating him with impure energy and rendering Weiss unfit to fuse with Omega. This destroys Hojo's neurodata. Nero and Weiss join to form Omega's core, becoming "Omega Weiss."

Omega Weiss has many projectile attacks, but most can be shot down before they reach Vincent. If Vincent hides in an alcove he can dodge most of the attacks and still keep attacking the boss. Should both of these strategies fail, the missiles can either explode upon impact near Vincent, or hover in place as mines. The mines will self-destruct if the boss fires a new wave.

At a certain point, crystal shields will form in front of Omega Weiss, and Weiss will break off from Omega to directly use sword combos against Vincent. Once the shields are destroyed, Weiss will return. They can even be destroyed before he has the chance to attack. However, if they are not destroyed quickly enough, they will fire at Vincent. There is also another variant, where a ring of shields orbits around Vincent before rushing at him.

Omega Weiss may use his most powerful attack, Omega Meteor, which can deal well over 2,000 damage. This can be avoided by standing on a crystal platform at the edge of the arena. The battle may come to an end well before Omega can use this end-all attack, though a Phoenix Down should be used, just in case. Omega Weiss is invincible during this attack.

After Omega Meteor, the boss glows orange and speeds up dramatically, releasing several attacks at once. This lasts for several minutes, but if not defeated, Omega Weiss will return to his normal coloration and attack pattern, with one new addition. Occasionally, it will "reseal" itself into the top-shaped form from its introductory cutscene, fly to a different spot on the arena, and reopen. This serves no apparent function, but it does make it temporarily invincible. Eventually, the boss may repeat the Omega Meteor phase.

This battle can easily be won by constantly assaulting Omega Weiss with the Death Penalty, a gun usable only when playing as Chaos. Each hit will deal either 1,000 or 1,500 points of damage. Hitting Weiss, who sits towards the top of the enemy, will deal a full 2,000 damage.

These attack names are derived from how the attacks themselves are described in the BradyGames strategy guide for Dirge of Cerberus -Final Fantasy VII-. Therefore, they are not necessarily the official names.

Retrieved from "https://finalfantasy.fandom.com/wiki/Omega_Weiss?oldid=3263039"
Community content is available under CC-BY-SA unless otherwise noted.