The Omega Weapon is a superboss in Final Fantasy VIII. Generally regarded as the game's toughest boss, it is hidden within Ultimecia Castle. Omega Weapon is a recolor of the Ultima Weapon but carries no sword.

At level 100, Omega Weapon has over a million HP. It is always at level 100 in the PlayStation version, but can be on any level in the PC version. After defeating it, the player unlocks the Proof of Omega in the game's help/tutorial section that congratulates the player for defeating the game's toughest boss.

To fight Omega, the player must place the chosen battle team on the switch point near the fountain and use the other team to ring the bell outside the gallery, which activates a short timer. The player must switch back to the other team and locate Omega Weapon inside the chapel before the timer runs out. Template:See Also

-In the PlayStation version, Omega Weapon is fixed at level 100.
-Obtain the Proof of Omega item after battle.

Omega Weapon will then repeat the sequence from Meteor. In-between these attacks Omega will still attack the party physically.

Using Potions on Omega prevents it from attacking. It is possible to keep the cursor on memory, put the Item command at top of a character's command list and use a Potion on Omega Weapon every turn while the others attack.

The party's Guardian Forces should be divided in a way that everyone gets a status defense junction, and then junction 100 Deaths to status defense to immunize the party against Omega's LV5 Death. Cactuar and Brothers have the Defend command that should be given to two party members. Speed is important, thus it's a good idea to junction for high Speed with Triple or Tornado.

The player can move useful items, such as Megalixirs and Holy Wars, to the top of the inventory list, and do the same with Meltdown and Aura for Magic. It is imperative to junction the party's HP to 9,999 to survive Megiddo Flame. Omega Weapon absorbs all elements, so the player must ensure nothing is junctioned to elemental attack. Auto-Haste is useful, and Auto-Protect is also good, if there is space left.

Using Holy Wars/Heroes to nullify Omega Weapon's attacks is a good idea, but before using the item, the player should cast Aura on the party to allow the use of Limit Breaks, as Invincibility prevents the party from receiving any buffs for the duration of the effect. There is also no indicator when the effect is about to expire, so the player must still remain vigilant.

In general, any attack that can hit multiple times can do massive accumulative damage. Once the Holy War's invincibility wears off, the party can use another. The player can obtain 10 Holy Wars from Gilgamesh card, more than enough to last the entire battle with Omega Weapon.

To defeat Omega Weapon without using invincibility from Heros or Holy Wars, the player must pay close attention to Omega's attack pattern. Omega's first move will always be LV5 Death, but with correct junctions it will miss and Omega will waste a turn. The party should inflict Omega with Vit 0 as soon as possible, either by casting Meltdown or by summoning Doomtrain. After Omega has used Meteor the party must immediately heal to full health, as it will use Megiddo Flame. The quickest way to heal is to use a Megalixir or Quistis's White Wind, but the Recover command and X-Potions can also be used.

After Megiddo Flame the party is left with 1 HP. This is the perfect time to unleash Limit Breaks, as Omega's next move, Gravija, cannot kill. One must only hope Omega won't use a physical attack at this time. After the round of Limit Breaks, and after Omega has used Gravija, the player must quickly use the Defend command to wait for Omega's next attack, Terra Break. It's unlikely a character will survive Terra Break without using the Defend command, even under Protect that will halve the damage.

As there are two Defend commands available for the party, two party members can retreat behind the Defend, while the third one continues to attack Omega with Limit Breaks. Defend makes the wearer invulnerable against Omega Weapon's physical attacks as well, and they should keep on defending even if the third party member dies before Terra Break, rather than revive them.

Terra Break will hit and kill the third party member, but the two using Defend will survive. The party must quickly heal before Ultima and revive their fallen comrade. Light Pillar hits only one party member and the cycle will start over again from Meteor. With this strategy, there is no need to cast Aura on the party.

One way to survive Omega's Terra Break is casting Zombie and Protect on each of the three party members. Zombie and Protect both halve physical damage, so Terra Break's damage will be reduced to 1/4 and is survivable. To heal with under Zombie status, the player can use a magic spell that the characters absorb instead of a curative item. For example, junctioning 100 Aeros and 100 Tornadoes to Elem-Def, and triplecasting Tornado can heal roughly 5000-6000 with one Tornado spell.

The player should ensure to come with extra Zombie and Protect spells because they will wear off and one person will die when Omega uses Light Pillar; as Zombie persists between battles, it can be used at the start of the battle to defend against Lvl 5 Death, so it can be used in conjunction with the Rinoa/Angel Wing tactic to protect her at LV100 without having to junction 100 Deaths to Status Defense, ruining the strategy. Damage can be done with Limit Breaks, especially after Megiddo Flame while one character is healing.

On top of earning AP and the drop item from the battle, the player also gets the Proof of Omega award. Like the Omega Badge in Final Fantasy V, the Strategy Guide in Final Fantasy IX, and the Mark of Conquest in Final Fantasy X, it has no real purpose except to prove the player has defeated the toughest enemy in the game. In the Steam version, defeating Omega Weapon earns the achievement Omega Destroyed.

In 1999 Kotobukiya released Omega Weapon as a boxed toy. It differs from the game, as the upper torso can separate from the "mount" and it has attachable separate legs to produce two figures. It was distributed outside of Japan by ArtFX.

Omega Weapon has an action figure in the Final Fantasy Master Creatures series 4. It is more detailed than its model in Final Fantasy VIII. 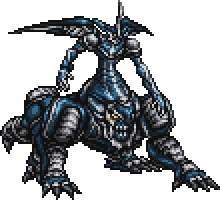 The attack "Megiddo Flame" may refer to the final battle at the end of time in Abrahamic religions, Armageddon. The word itself is based on the mountain of Megiddo in modern-day Israel, where the battle is alleged to take place.

Retrieved from "https://finalfantasy.fandom.com/wiki/Omega_Weapon_(Final_Fantasy_VIII)?oldid=3196053"
Community content is available under CC-BY-SA unless otherwise noted.