Omega Mk. XII is an optional superboss in Final Fantasy XII, and is considered one of the toughest bosses. It is a gigantic mimic found in the highest reaches of the Great Crystal.

In the Zodiac versions, Omega Weapon is also fought on the Trial Mode Stage 99 where the following items can be stolen from it: Bonebreaker (common), Ribbon (uncommon) and Excalipur (rare).

An ancient weapon of war, traveling the rifts between dimensions. Its body is set with machineries and weaponry of a far higher order than anything made today. Though it is a construct, it was built with the ability to grow, and so it has evolved like a living creature.
It generates the energy it needs to live by filtering and condensing Mist from the air.

The player can flee. Omega Mark XII is always weak to one element and absorbs all others.

The player can flee. Omega Mark XII is always weak to one element and absorbs all others.

Omega is located in the Great Crystal at Giruvegan, and is available to fight once the hunt for Yiazmat has been accepted. The player party can enter Omega's chamber in the Crystal beforehand, but it will be in a dormant state and unresponsive, resembling a giant treasure chest like the Mimics in other dungeons.

If Gate Libra 2 is unlocked when the player first gets there, they should head straight to Uldobi Jilaam Praa and turn right to enter Uldobi Phullam Praa'vaa, touch Gate Aquarius 1, but not go further.

After activating the Taurus Gate Stone the player can return all the way back to Uldobi Jilaam Pratii'vaa and enter the right path where Gate Capricorn II was. The path to the left will lead to Gate Capricorn II and activating it will allow access to the right in the next area. In the original version, this area possibly has a Brave Suit or the Zodiac Escutcheon, the best shield in the game. The Zodiac versions have Hastega instead. Doing this however, the player will have to backtrack all the way to the Capricorn Gate Stone and re-activate it.

To open the path to Omega Mark XII right away, the player should enter the path directly ahead in Uldobi Jilaam Pratii and activate Gate Capricorn I in Uldobi Phullam Pratii'dii, take the right path after activating the Gate Capricorn to find Way Stone XXI on the platform of Dha Vikaari Sirhru Si. Way Stone XXI will take the party to A Vikaari Uldobi Si, which is one platform away from the Way Stone XXIII that will teleport the party to the platform right before Omega Mark XII.

Omega is a tough opponent and will continuously use a laser beam usually kills a character in two hits, even at level 99. The only way to mitigate this is through protect or to repeatedly use Wither on it in the Zodiac versions.

Omega always attacks the nearest target and is one of the few enemies that cannot detect players who are vanished. It inflicts party members with Berserk. Its attacks never combo, but it is fast as its attacks take no Charge Time to perform. It has no special attacks or an attack pattern, and simply focuses on the nearest party member.

The player can flee, but if they exit the zone, Omega's HP will be fully restored when the player returns. Omega ignores the player's Evasion so equipping shields is pointless. It is best to not use elemental magick against it, as Omega absorbs all elements but one. Damaging Omega also damages the attacker.

As Omega's attack takes no charge time, it is advisable to set the Battle Speed to the fastest, as otherwise it only hinders the party. Using Balance on low HP works for added damage. The party should have Arise, Renew, and Curaja. Omega is one of the few enemies that cannot detect vanished characters, who should never be targeted as long as they don't target Omega either.

A simple tactic is to equip Bubble Belts and use Reverse. Because Omega always attacks the nearest target, the player can keep one supporting character out of its range to revive fallen allies and to keep casting Reverse and other buffs, although they might still get berserked if Omega targets them. The attacker(s) needs to be as close to Omega as possible, as they get berserked and then knocked back with each of Omega's attacks, and may fall too far away to attack, and then get killed by Omega as he finishes off the other party members. The player can try going directly behind Omega to avoid this.

The caster can equip a Turtleshell Choker to not run out of MP, but would then benefit from Self: Bubble gambit. If not using the choker, replenishing MP with items is more reliable than using Charge. The caster can also cast buffs like Bravery and Haste onto the attackers, and Vanish onto themselves, if available. In the Zodiac versions, only White Mage and possibly Monk learn Arise, but Raise and Phoenix Down can also be used, so the support character does not need to be a White Mage. They likely have their hands full casting Reverse, reviving and buffing, and so it is best to turn off their attack gambits and let the other two party members hack away at Omega's health.

Another strategy is to use Lure on the main attacker so Omega Mark XII will only target them, and equip him/her with a White Mask. Another character should be equipped with the Excalibur and be set to continuously attack the Lured character whose White Mask will absorb Excalibur's Holy damage as HP. Other elements could also be used, such as Dark (with a Black Mask and Yagyu Darkblade). If the player does not have this set-up, then normal healing can be used with the frontline character buffed with Protect, and equipping a Bubble Belt and generally good armor (light armor may be optimal due to Bubble's HP-doubling, but a mixture of light and heavy armor can also be used). The other characters should be set up to ensure that the frontline character maintains Decoy at all times, and then to heal them constantly. If things go wrong, the party can retreat to the edge of the zone to heal.

Strong non-elemental weapons that can deal combos are good for the main attacker, such as greatswords, Tournesol being notable among them, Masamune, Kumbha, Zodiac Spear, Mesa, Whale Whisker, and Kanya. The Brave Suit is a good armor to equip as it provides permanent Bravery, and so the party does not need to re-bestow the buff after the attacker is KO'd and revived.

Omega is the second-to-last stage of the Trial Mode. The battle is the same as in the main game, but the player will be severely handicapped if they get inflicted with Berserk and enter Stage 100 in this state. The player can prepare for the final stage by starting to buff the party when Omega is nearly dead.

The stage has twelve treasures with the same loot, but chance to yield different items with Diamond Armlet:

Following defeat, Omega will drop the Omega Badge loot. Selling the Omega Badge, Godslayer's Badge and Lu Shang's Badge will unlock the ultimate greatsword in the Bazaar: the Wyrmhero Blade.

The Final Fantasy XII Scenario Ultimania reveals that the Mythril Sword, an item not obtainable through shops, loots, or treasures, can be obtained from defeating Omega in the original version. Although the odds are astronomically low, it is possible it might even drop two Mythril Swords. The player should raise the chain level to its highest just before attacking Omega if they wish a chance to receive one. In the Zodiac versions, Omega no longer drops the Mythril Sword, now dropping a Bonebreaker instead.

Unlike other optional bosses, Clan Centurio doesn't give a reward for defeating Omega.

According to the Clan Primer entry, Omega Mk. XII is a construct of machine and weaponry that was created to battle a great wyrm, possibly the Hell Wyrm or Yiazmat. This could also be a reference to Shinryu, a dragon associated with Omega in Final Fantasy V.

Omega was given the ability to grow and evolve. It journeyed to the Great Crystal, and continued to grow on its own, using the Mist as an energy source. The story from the Urutan-Yensa bestiary entry seems to tell of the creation of Omega Mark XII, and implies that the creator lost track of it after its tracking devices were destroyed in a battle.

In the original Japanese version, Omega has a little more than 10 million HP, making it second only to Yiazmat. For the North American and PAL versions, its HP was reduced to 1 million, less than the Hell Wyrm and even a couple of the higher Marks. Omega's attack was also weaker in the Japanese version. The official BradyGames guide to Final Fantasy XII still erroneously displays the Japanese stats. The North American and PAL versions also added the Berserk status effect onto Omega's attack. 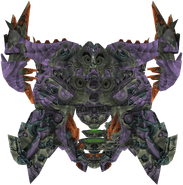 "Omega" is a reference to Omega Mark's heritage of the Omega superboss from earlier Final Fantasy installments. [view · edit · purge]Omega (capital: Ω, lowercase: ω; Greek Ωμέγα) is the twenty-fourth and last letter of the Greek alphabet. It is synonymous with a set's end or limit.

"Mark" in his name probably does not bear influence of the hunt marks of the many hunt clans in Ivalice; it is more likely it is "Mark XII", describing it as the 12th model of Omega Weapon, after a series of modifications to the original. This naming convention was first used in Final Fantasy V Advance, with the superboss Omega Mk.II. The "XII" part of the boss's name is an allusion to the number twelve.

Much like Gilgamesh, Omega Mark XII is said to be traveling the rifts between dimensions. This could hint that this is the same Omega encountered in Final Fantasy V, who was trapped in the same Interdimensional Rift as Gilgamesh. Upon defeat, Omega Mark XII's head falls off. Its decapitated remains, as seen in a short sequence, resemble the traditional Omega design even more.

Omega Mark XII was perhaps designed to defeat Yiazmat, as it only "activates" when the hunt for the great wyrm is accepted. Yiazmat as the holy-elemental wyrm could be seen as the game's version of Shinryu; in Final Fantasy V it is said that "The dragon Shinryu came upon Omega's heels," perhaps establishing them as rivals.