A titanic, humanoid Cogna. Originally manifested in a world outside of Grymoire. True to its name, it's likely to be the last thing you ever see. Its abdomen looks like it wants to eat you.

Omega God is a superboss in World of Final Fantasy. 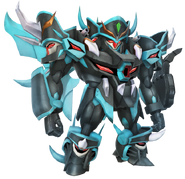